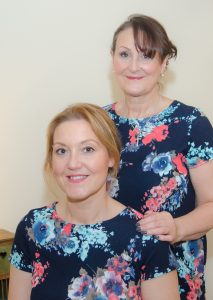 A Leek beauty and wellbeing centre is celebrating its 10th anniversary by looking back to 2005 while investing in the business’ future.
An open day will be held at The Retreat on Friday, June 19, when the Retreat will be offering mini-treatments for just £5 and giving customers the chance to book treatments for future dates at 2005 prices.
The Retreat will also demonstrate a new treatment called the Mesolift – a safe and natural alternative to a facelift.
Meanwhile, mother and daughter team, Yvonne Barlow and Vicki Dawson have embarked on a programme of refurbishment work to refresh the Mill Street venue.
A fresh outside paint job has made the Retreat stand-out on the street scene, while the Retreat’s bistro is being rebranded as the Jester Tearooms.
Yvonne and Vicki head a 32-strong team at the Retreat. It is a big leap forward on the start of the 21st Century when Yvonne and Vicki first launched a beauty business in a shop on Buxton Road, Leek.
Expansion really took off when the duo took the chance to buy the former Jester pub and restaurant and open the Retreat in 2005. It was a case of back to the future for Yvonne who had previously helped run the Jester as a thriving business in the 1980s.
“It has been a fantastic 10 years and we have some incredibly loyal customers and staff,” said Yvonne.
“Several staff members have been with us throughout the decade and we have more than 200 customers who we have seen regularly since we opened our first salon in Buxton Road.
“We’ll be marking this special anniversary by holding a prize draw for customers who have been with us since 2005. Vicki and I saw some of them come in as children with their mums and have watched them grow, get married and have children of their own.
“We’ll also be honouring our long-serving staff, and there will be special spot prizes for customers, during the Open Day.”
Several improvements are being made to mark 10 years in business. Along with the new outside paint work, Yvonne and Vicki are planning to have the inside of the premises re-decorated.
​Yvonne added: “We want to re-emphasise to people that we are a friendly, family business providing a cosy, welcoming environment.
“The tea room gives customers a better sense of our offer – good, well-priced food, served in a homely, comfortable atmosphere.”
ENDS
For media enquiries contact Nigel Howle on 0776 2043436, email nigel.howle@o2.co.uk

The Retreat was opened by Yvonne Barlow and daughter, Vicki, in 2005. Along with the health spa and hairdressing salon, The Retreat incorporates the Jester Tearooms.
Yvonne, a beauty therapist, has a long association with the building now known as the Retreat. Along with other family members, Yvonne ran the Jester, a pub and restaurant on the site, for many years.