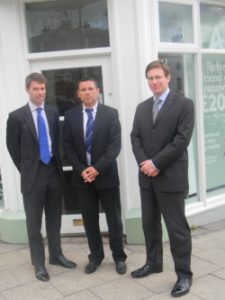 A Stoke-on-Trent based law firm has won compensation for over 100 workers who have had their hearing damaged while at work.

Attwood Solicitors are now acting for around 500 current and retired workers from Cumbria to Cornwall.

Attwood Solicitors has its head office in Stoke and set up a hearing advice centre in St John’s Square, Burslem, in early 2011.

The Burslem centre is designed to be welcoming and people can drop in for a coffee and receive free advice in an informal setting.

The industrial injury specialists have worked on cases across a wide section of heavy industry, from pottery workers in Stoke-on-Trent to shipbuilders in Barrow-in-Furness, Southampton and Plymouth.

Principal Solicitor Ashley Attwood said settlements had now been reached in around 100 cases nationwide with payouts averaging around £5,000.

Dr Charlesworth Jones said: “My work with Attwood Solicitors is raising awareness of a major issue.  For many years workers had their hearing damaged because employers failed to provide adequate protection.

“In my experience people are reticent about coming forward – but they should be compensated and the law provides for that.”

Free consultations with an audiologist can be arranged by telephoning Attwood Solicitors on 0800 587 3231 or by going online to www.attwoodsolicitors.co.uk.

Any sounds above 80 decibels – about the equivalent of an average alarm clock going off – are considered dangerous but many older people are now suffering from damage caused before current health and safety standards were introduced.