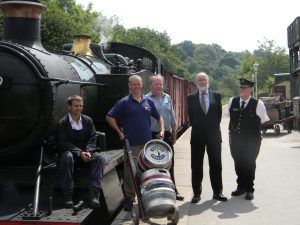 A special partnership has been forged in Staffordshire’s Rhineland to create the world’s longest beer festival.

Churnet Valley Railway has joined forces with Titanic Brewery and the pubs of the valley to launch a very different sort of beer festival which will offer over 40 real ales and ciders from the bars of three stations, two trains and four pubs along the five miles of the valley.

Two trains will be operating a continuous service on Saturday July 23 and Sunday July 24 from 10.30am until 4pm for which no bookings are required. The service will operate from Kingsley & Froghall and Cheddleton stations, stopping at Consall and also take in the nine miles of the newly-opened track to Cauldon Lowe.

Titanic Brewery has worked with the CVR team to plan the event and source their beer and ciders to be offered in the bars on the trains and at all three stations – with the main CVR selection at Kingsley and Froghall Station.

In addition, organisers have liaised with The Boat Inn at Cheddleton, The Black Lion at Consall Forge, The Railway Inn at Froghall and The Fox and Goose at Foxt – each of whom has chosen their own special selections of real ales and ciders.

A catalogue of all the beers and ciders will be available at all locations and via two websites, www.churnet-valley-railway.co.uk and www.titanicbrewery.co.uk

Recognising Staffordshire’s unique place as the world’s capital of English Ale, a good proportion of beer on offer will be supplied by local breweries. Beer lovers will also be able to enjoy some championship ales from independent breweries throughout the UK.

Friday night preview special – Tickets are still available for passengers to join the sausage and mash supper train on the evening of Friday July 22. The service will depart Cheddleton at 7.30pm and 9pm, and Kingsley and Froghall at 8pm and will include an opportunity to preview of the beers and ciders (pre booking is essential for the service). Froghall station bar will also be open to non passengers from 7pm to 10pm on the Friday.
Ends