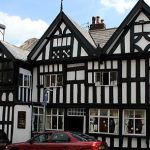 A much loved Staffordshire pub which has been restored to the heart of the community by Titanic Brewery has won a Taste of Staffordshire award.

The Roebuck Hotel, Leek, scooped the Special Award for a British Heritage Pub at the 2012 Taste of Staffordshire Good Food Awards.

The award is made “to honour an establishment that embodies all that is best about the simple British pub.”

The Roebuck dating back to the 17th Century was acquired by Titanic Brewery in 2011.

A £100,000 investment by Titanic Brewery in the Grade Two Listed Building restored the pub to its former position as a popular pub at the heart of the town centre.

Dave Bott, Director of Burslem based Titanic, said: “The Taste of Staffordshire Awards are much sought after and we were delighted that the Roebuck won recognition.

“It is a wonderful building, steeped in history, and we took great care to restore it in a sympathetic manner.”

The Roebuck is one of six pubs in Staffordshire owned by Titanic Brewery.

The brewery takes great pride in re-opening and renovating pubs and restoring them as community hubs for local people.