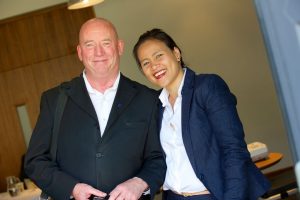 An expanding referral networking organisation attracted delegates from as far afield as the Czech Republic and Slovakia to its annual awards ceremony in Cheshire.
The BforB Awards 2015 celebrated the success of members who have generated many thousands of pounds of business over the past 12 months.
From a head office in Manchester, BforB has grown to host business groups across England from Yorkshire to Hampshire.
And the organisation founded in 2001 by husband and wife team John and Mel Fisher, has gone international with groups in Australia, Slovakia and the Czech Republic.
Members came together at Wychwood Park, near Crewe, to celebrate the success of BforB groups and their members at an event hosted by BforB regional director and public speaker, Len Foster.
UK Managing Director, Mel Fisher, said: “It has been a year of growth for BforB and it was great to see such a range of members from across the UK and beyond at our awards event.”
The winners were:
Member of the Year: Kate Hazeldine, of Yellow Circle Web Solutions
Executive Team of the Year: Alsager Ladies BforB
Venue of the Year: The Retreat, Leek
Referral Master: Richard Taylor, Fatsoma
Franchisee of the Year: Tony Hayes.
The awards were presented by Kamila Zarychtova who has established more than 40 BforB groups in the Czech Republic and Juraj Bais himself looking after over 100 members in Slovakia since October 2012
Celebrating her success, Kate Hazeldine, of Stoke-on-Trent based Yellow Circle Web Solutions, said: “BforB has had a profound effect on our business. We have gone from two people working around our kitchen table to a staff of six and I owe a lot to BforB for that.
“I think we were nominated for our proactive approach to BforB. I always make a point of going out and finding referrals for members and promote the benefits of developing referred business by being interested in participating in activities, such as looking after guests, at our Leek BforB group.”
Kate attends fortnightly meetings at the Retreat, Leek, which won the award for BforB Venue of the Year.
The Retreat, a mini spa and tea rooms, hosts two BforB groups on alternate Thursday and Friday mornings. The Retreat’s owner, Yvonne Barlow, is a keen member of BforB and the groups have thrived under the management of BforB Regional Director, Len Foster.
Franchisee of the Year Tony Hayes runs 14 BforB groups around the perimeter of Manchester’s M60 from Bury to Stockport.
He said: “It is the people who make BforB work. It is fabulous to be able to bring people together and see them getting to know, like and trust each other.
Once that trust has been established we see referrals flow and this has helped many start-ups and SME businesses to thrive.”
Alongside breakfast meetings, BforB runs a variety of referral groups including meetings at 9,30am and lunchtime which are more accessible for parents with child care responsibilities.
This has led to a thriving network of BforB Ladies lunch groups in Staffordshire and Cheshire, including Alsager Ladies who won the honour for Executive Team of the Year.
Alsager Ladies meet fortnightly at the town’s Best Western Manor House Hotel.
Accepting the award, Dawn Amison said: “We started Alsager Ladies two years ago and we gained 22 members relatively quickly. We see it as very much a family with members supporting each other as well as passing business referrals.”
Richard Taylor of Manchester based online ticketing company Fatsoma was named as Referral Master of the Year.
“We have had a tremendous 12 months and working with BforB on their ticketing platform. I am proud to become a part of that a potential group turn – over of £800k and counting in our group. That has been due to high level of proactivity in one to one meetings and follow –up between members in my BforB “ said Richard who is a member of BforB in Salford Quays.
ENDS

For media enquiries contact Nigel Howle by telephone on 0776 2043436 or email nigel.howle@o2.co.uk