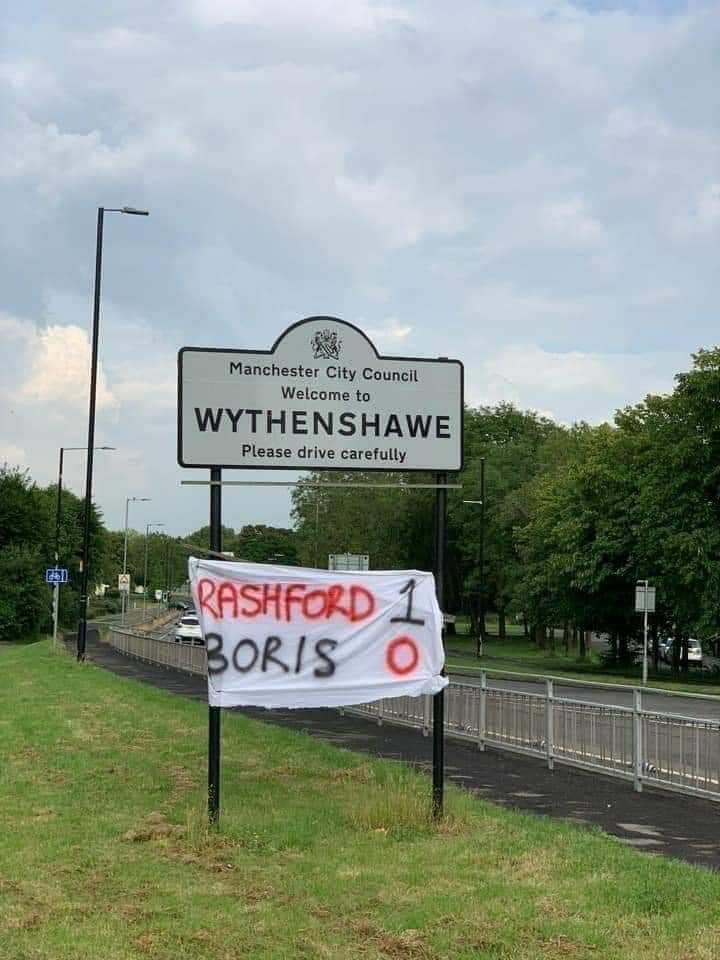 Standfirst: The success of Marcus Rashford’s campaign to get free school meals is rightly gaining huge praise right now. With experience in the business of charity PR and the relationship with celebrities, I thought it worthwhile giving it some thought here and I have asked grants and fundraising expert Andrew Heaward to add his insight – thanks Andrew.

There was a makeshift banner put up in one of the most deprived wards in Greater Manchester on Tuesday (16/06/20). Hung from the “Welcome to Wythenshawe” sign, it  stated “Rashford 1, Boris 0.”

Hardly anyone in the UK could have failed to notice how the England footballer changed Government policy this week by speaking out on the necessity for free school meal vouchers to continue when school is out for the six week summer break. Wythenshawe is where Rashford grew up; it’s a sprawling  housing estate, close to Manchester Airport and not far from the much more affluent areas of Wilmslow and Hale Barns. In terms of equality of opportunity, it may as well be 500 miles away.

The Manchester United striker spoke powerfully on how he watched  as his mum struggled to put food on the table during holiday periods when children don’t get the benefit of a free school meal.  Fortunately, for children across the UK, despite the trappings of fame and fortune, he didn’t forget.

Rashford’s campaign forced the Government’s hand. On Tuesday morning, a host of Tory MPs were dispatched to the news channels to say the long-standing policy of not replacing free school meals with vouchers during the six week break, would not change.

By mid-morning, that stance had crumbled. Children of poorer families will get £15 a week in vouchers, not a huge amount of money, but surely enough to see families who often visit local food banks, heave a big sigh of relief?

Footballers often try to perfect the Cruyff turn but there’s a new kid on the block – the rapid political u-turn.

I have worked with charities, some had celebrity backing, some didn’t, one was even founded by a former footballer, even more famous than Rashford. In my experience, celebrity status certainly opened doors, both with potential big donors in the City of London and politicians in nearby Westminster. I have been involved in events in the historic library at Lloyds of London and in the committee rooms of the Houses of Parliament.

Here in Staffordshire, we have seen the power of local lad Robbie Williams’ Give It Sum fund and, until coronavirus intervened, he was meant to be back in Burslem this summer to stage a concert for charities at Vale Park.

Having worked to find patrons for charities, here’s a few things to consider:

Finally from me, consider the influencers, not just the celebrities.  For example, while working on PR in the humanitarian charity  sector, we were able to forge links with relevant Parliamentary Select Committees and were even able to get involved with an awareness raising event in the grounds of the Palace of Westminster.

Start with getting a working relationship with your constituency MP. What are their interests? Who can they influence? Can they unlock doors you’d otherwise never get through?

If you get at least some of the above working well, raising your charity profile through PR, and getting more interest on social media. should be much easier.

Over to Andrew for tips on how to find sources of funding:

Nigel’s advice above about how to find and work with a celebrity is just as powerful in the world of fundraising as in PR.

Political figures or celebrities can be both great ‘door openers’ and play a vital role in raising the profile of a campaign or cause, their endorsement can even elevate the attention a grant application receives. In certain kinds of fundraising their input is even more valuable, for example Crowdfunding. Here a celebrity endorsement ideally on video or with a relevant photograph can play an effective role in attracting interest in a campaign or persuading the public to donate. Working with a celebrity to raise funds can also sometimes offer other interesting opportunities, for example by their designing a special edition T shirt offered for sale or as a Crowdfunding reward.

Whatever your fundraising plans, remember:

If this feels like it is all too much, don’t give up, instead seek expert help and advice.

You can find more about Andrew’s work here – https://heawardsolutions.co.uk