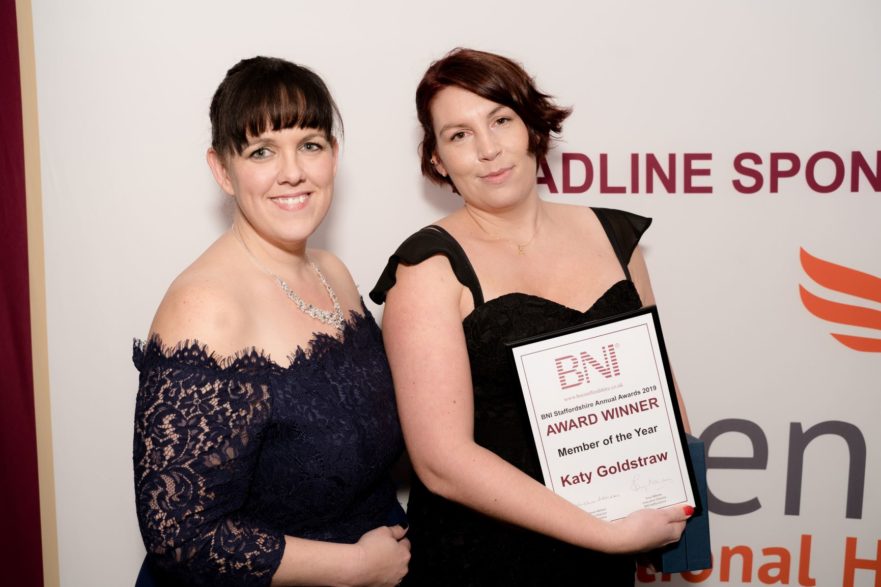 Members of Staffordshire’s biggest business networking organisation are celebrating a record-breaking year during which almost £10 million of revenue has been generated for the local economy.

BNI Staffordshire has expanded year on year since it was taken on by Newcastle-under-Lyme entrepreneurs Tony and Stephenie Altham in 2015, growing revenue for its members by over £6m and doubling membership to around 200 business people.

Success was celebrated at the BNI Staffordshire Awards, sponsored by Phoenix Occupational Health, a dinner and ball at Uttoxeter Racecourse attended by around 180 guests.

Tony said: “2019 has seen BNI Staffordshire surpass all previous records, our members passed £9.7 million of invoiced business in the calendar year and BNI Staffordshire won the Outstanding Growth Award for UK and Ireland.

“We’re very proud of our members, they work hard for each other and act as ambassadors for each other’s businesses. Importantly, growth for Staffordshire BNI translates into a boost for the local economy, creating jobs and spending power.

“This year’s awards evening was our biggest so far and was an opportunity to say thank you and to celebrate together.”.

BNI members meet weekly and are taught to work collaboratively to generate new business opportunities for each other. There are currently seven established BNI chapters in the county, two in Stoke-on-Trent, three which meet in Barlaston, one at Leek and one at Acton Trussell.

BNI Staffordshire has also established four new core groups in the Staffordshire Moorlands, Stoke-on-Trent, Cannock Chase and Uttoxeter. These are growing groups which could become established chapters during 2020.

Awards across a host of categories, from Best Newcomer to Chapter of the Year, were hotly contested at the 2020 event.

Katy Goldstraw, of Next Generation Plastering and Resin Driveways, took the prestigious Member of the Year Award.  Operations Director Katy, a member of Leek’s James Brindley BNI has been thanked for generating over £200,000 of business for other BNI members.

Matthew Dashper-Hughes, a BNI Director Consultant with responsibility for the Leek members, said: “Katy works so hard to generate referrals for others through linking them to her own business contacts and finding synergies, but over and above this, Katy is an inspirational leader who has forged a culture of inclusivity, ‘can do’, and positivity that is now adding massive value to the local economy.

“Based on the principle of every pound that is spent locally recirculates 5-10 times, Katy and the other James Brindley members have benefitted the local economy by circa-£5m-£9m in the last year.”

BNI at 10, which meets weekly at the Moat House, Festival Park, took home the prestigious Chapter of the Year Award. Fittingly, Lyndsey Marchant, Managing Director, of the evening’s main sponsors, Phoenix Occupational Health, is a member of BNI at 10.