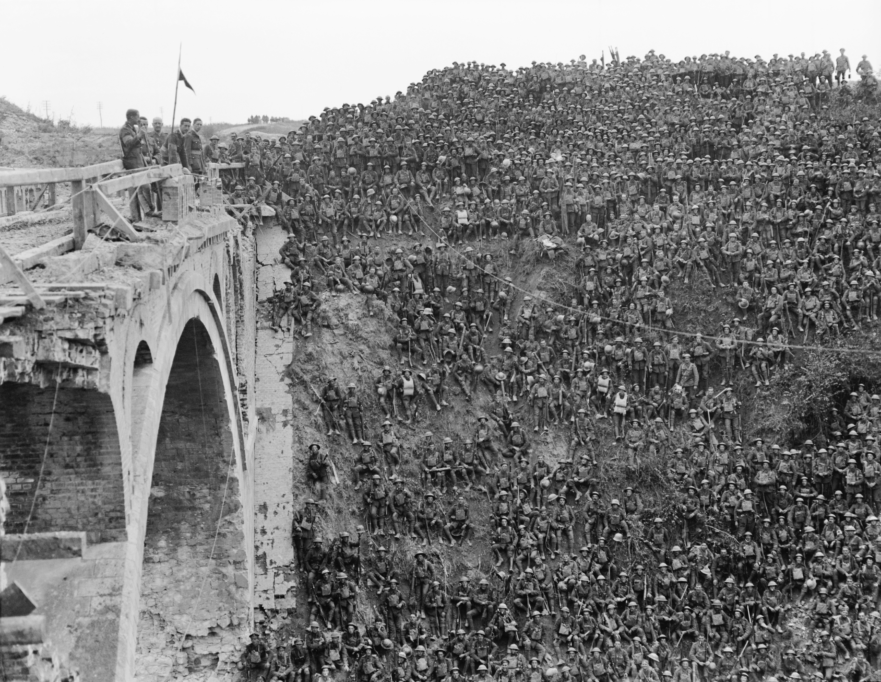 The Staffordshire Regiment and the Breaking of the Hindenburg Line

A new exhibition and film are to be launched to commemorate the bravery of Staffordshire soldiers in a pivotal battle of World War One and there’s a chance to get involved by visiting a new website at www.137Staffords.co.uk.

Heritage Lottery funding has been won to honour the sacrifices made by Staffordshire soldiers in a battle which became known as “the greatest chapter in Britain’s military history”.

Staffordshire Regiment soldiers were to the fore on September 29th, 1918 as the British forces broke the Hindenburg Line. Men from Wolverhampton, Walsall, Burton and North Staffordshire were central to a crucial chapter in the Battle of the St Quentin Canal, breaking the German defences. Germany signed the armistice to end the Great War 43-days later on 11th November, which brought to an end four years of brutal warfare.

Many of these men can be seen in a photograph which shows Brigadier General JV Campbell addressing the victorious Staffords. The Staffordshire Regiment is appealing for people to contact them if they have any information about family members in the vast crowd of soldiers 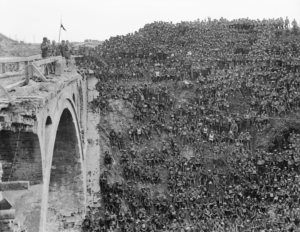 “David Lloyd George called the battle the greatest chapter in our military history and The Staffords spearheaded the attack, which smashed the Hindenburg Line,” said Danielle Crozier, Curator at the Lichfield-based Staffordshire Regiment Museum. “It was a fine military victory but it’s one that’s often over-looked and we look forward to sharing this story with the public.”

Designed to mark the Centenary of the First World War, the project will enable local people in Staffordshire to come together to preserve the memories and heritage of the people who lived through it. Volunteers will help research newspaper clippings, photographs, war diaries and the Regiment archives as well as family tales passed down to help them to build a clear picture of what happened at the battle on September 29th and to find out more about the Staffordshire men involved.

Awarded through the Heritage Lottery Fund’s First World War then and now programme (www.hlf.org.uk/looking-funding/our-grant-programmes/first-world-war-then-and-now), the project will focus on the contribution of the 137th Staffordshire Brigade on September 29th 1918.

With help from professionals, the information gathered will be digitally recorded and hosted online for people around the world to find out more about the astonishing achievements of the Staffordshire men. The Museum will also work with Staffordshire film-makers, Inspired Film and Video, to produce to produce a documentary film which will be screened at the Museum.

A digital resource pack is to be produced and this will be sent to local schools, so that this incredible story of sacrifice and bravery can be preserved and shared with young people across Staffordshire and beyond.

Vanessa Harbar, Head of HLF West Midlands, said “The impact of the First World War was far reaching, touching and shaping every corner of the UK and beyond. Thanks to National Lottery players, HLF has already invested more than £94 million to more than 1,900 projects – large and small – that are marking this global Centenary. With our small grants programme we are enabling even more communities like those involved in the ‘St Quentin Canal project’ to explore the continuing legacy of this conflict and help local people broaden their understanding of how it has shaped our modern world.”

About the Heritage Lottery Fund and support for First World War heritage
• Thanks to National Lottery players, we invest money to help people across the UK explore, enjoy and protect the heritage they care about – from the archaeology under our feet to the historic parks and buildings we love, from precious memories and collections to rare wildlife. www.hlf.org.uk. Follow us on Twitter, Facebook and Instagram and use #NationalLottery and #HLFsupported.
• To date, almost £100million in HLF grants has been awarded to projects across the UK so they can mark the Centenary and explore all aspects of First World War heritage that matters to them. Through its First World War: then and now programme, HLF is making at least £1million available per year for six years until 2019. It is providing grants between £3,000 and £10,000 enabling communities and groups right across the UK to explore, conserve and share their First World War heritage and deepen their understanding of the impact of the conflict. To find out how to apply for funding visit www.hlf.org.uk/thenandnow If a group needs a grant of more than £10,000 for a First World War project, it can apply to HLF through its open programmes www.hlf.org.uk/firstworldwar
• To join the conversation on social media please use #understandingww1