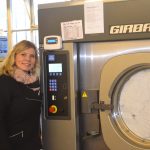 A huge new washing machine, with 10 times the capacity of a household appliance, is driving growth at a North Staffordshire commercial laundry,

Iron Maidens is set to create new jobs and double capacity in 2015 after showing 50 per cent growth in the past 12 months. Funding via the Michelin Development Fund and Business Enterprise has helped fuel growth.

It is a personal triumph for business owner Sharon Bridgett who initially set up a small laundry business in her home garage after being made redundant 15 years ago.

“Strong sales have driven investment including a new folding machine and a washing machine with a 60 kilo capacity which we took delivery of in November.

Domestic machines generally take loads of around six to eight kilos and the new machine is even a third bigger than other commercial washers.”

Plans are now being drawn up to introduce a double shift pattern for the first time and this will lead to new jobs at the laundry in Sutherland Road, Longton.

“We were able to make two members of staff full time in 2014 and new jobs are set to be created in 2015,” said Sharon. “I was also able to promote a member of the team to laundry manager and this has given me more time to work on bringing in new business and working with existing customers.”