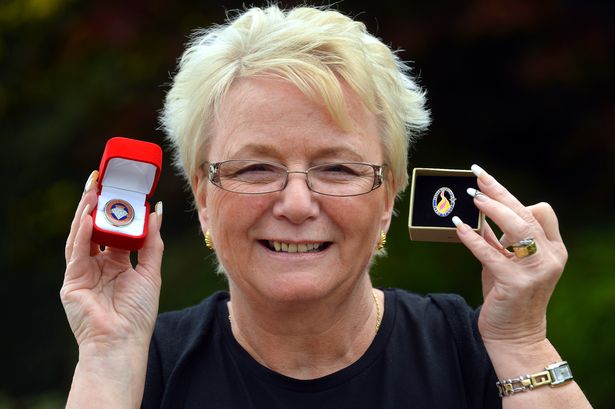 Ada has organised a Pink Tie Ball at the Moat House, Festival Park in each of the las 14-years. Now the Clayton pensioner is planning for the October event and is appealing for local companies to support her by taking an advertisement in her fundraising brochure.

Her amazing fundraising efforts were recognised by the Queen in 2018 with the award of a British Empire Medal. After raising over £1m, the former Steelite pottery worker even has a room named after her at the headquarters of Cancer Research UK.

“I won’t let a pandemic stop me fundraising and plans are going ahead for the Pink Tie Ball,” said Ada, who is now splitting the funds she raises between Cancer Research UK and the British Heart Foundation.

“Even if we have to delay, the fundraising will continue and I am now launching my 2020 Pink Tie brochure. I am appealing to businesses in North Staffordshire to take a page, or just half a page, in the brochure, with all funds going to the charities.

“Great progress has been made in the fight against cancer and heart disease but the scientists and doctors continually need funding to push research forward and to stop people dying earlier than they should be dying. Breakthroughs in research give families more time with their loved ones and that’s so important, particularly as this pandemic has brought home how precious life is with the talk on the news every day of excess deaths. That’s an awful phrase that in reality means people are taken from their families years too early.

Ada fundraises tirelessly and regularly gets up at 5am to attend breakfast networking meetings with local business people. This year, she had begun a campaign to collect one mile of 20 pence pieces for her chosen charities and had planned a VE Day pie and pea supper to raise even more funds.

“I won’t give up and attending the business events run by BNI and NetworkIn keeps me motivated. Everyone is so kind. Before the pandemic, I was regularly being handed piles of 20 pences at networking meetings, as people saved them during the week. Sadly, that can’t happen for the time being, and we had to also cancel our VE Day celebration, but we must keep raising funds.”

To support Ada, businesses should email her at adahaywood1@gmail.com. It costs £100 for a page and £50  for half a page.