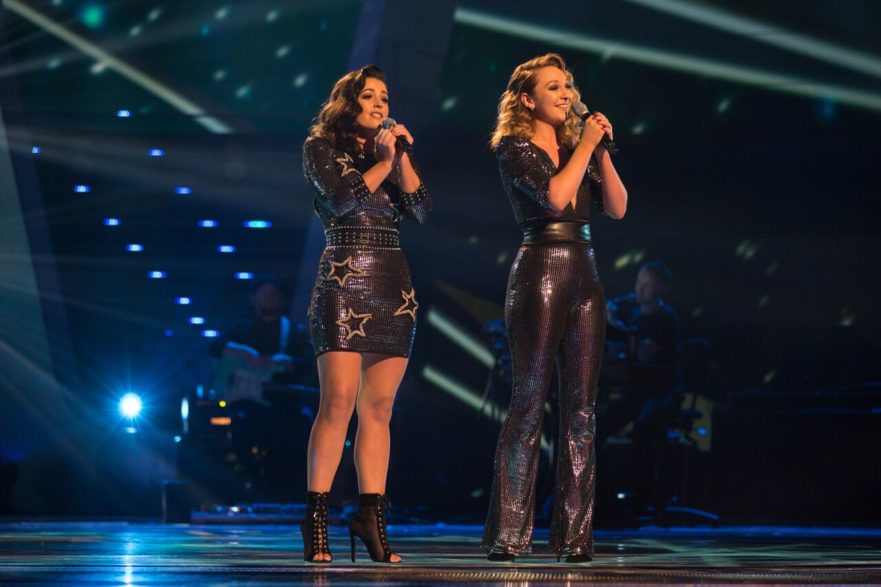 Globe-trotting Cheshire opera duo Belle Voci are looking forward to performing ”just down the road” in Staffordshire after a stellar breakthrough year.

Emily Burnett and Sophie Rohan will headline Proms and Prosecco in the Park at Weston Park, near Stafford, on Sunday, 26 May.

This time last year, Belle Voci were finalists in ITV prime time show The Voice and it has been non-stop ever since.

Emily said: “We have sung at both the Rugby Challenge Cup Final and the FA Community Shield at Wembley Stadium, we have supported Alfie Boe on his tour and Gary Barlow at the James Milner Foundation Charity Ball.

“We have travelled all over the world to sing at events and we released our second album, Christmas With Belle Voci, in December 2018. It has been non-stop.”

“We are looking forward to performing close to home and cannot wait to immerse ourselves in the fun, festival atmosphere. We will be performing a couple of our brand new arrangements of firm favourites, and are excited to show them to everyone.”

Emily and Sophie met while working at the Yew Tree, a gastro-pub at Bunbury, Cheshire.

Four years later, after plenty of hard work getting gigs at weddings and corporate events, Belle Voci got their big break when Emily accidentally applied for The Voice thinking they were looking for singers for their Christmas party!

Belle Voci were a huge hit on the show, not least with judge Jennifer Hudson who described their voices as “perfection” following their debut performance.

Emily and Sophie progressed all the way to the live final 2018, performing to more than five million viewers and singing My Heart Will Go On with their idol and coach Jennifer Hudson.

by Fizz Festivals, the company behind highly successful Proms and Prosecco events in nearby Newport, Shropshire, in 2017 and 2018.

The event serves up a heady mix of classical music, the West End musicals, choral music and classic pop and top it off with a glorious proms finale with rousing renditions of standards such as Rule Britannia and Land of Hope and Glory.

Organiser, Esther Wright said: “We want people to bring the whole family, picnic tables and chairs, sit back and relax in a warm, friendly atmosphere.

“I’m delighted to announce that Fizz Festivals have partnered with well-known drinks brand Aperol for our Weston Park events meaning that every guest aged over 18 will receive a free glass of Aperol Fizz on arrival.

“Fizz Festivals is dedicated to serving up outdoor events with great music, fabulous street food and, of course, plenty of fizz, craft ales and gin. We have attracted almost 2,000 people to Proms and Prosecco at Chetwynd Deer Park in each of the past two years.”

Proms and Prosecco is just part one of two days of live music put on by Fizz Festivals at Weston Park during the late May Bank Holiday weekend.

The Fireflies Festival, on Bank Holiday Monday, will have a pop and rock vibe, featuring a diverse mix of singers and bands, with a headline performance from Take This, a leading tribute act whose A Night Of Take That show has won wide acclaim. There will also be free children’s activities including crafts and a circus skills workshop from the highly acclaimed Circus Mash based in Birmingham.

Esther said: “The two events have a different vibe but there’s a huge audience out there for high quality live music of any genre and we are offering the opportunity for people to come to both, or just one, with a range of ticketing options. Our Earlybird tickets are on sale until the end of April, or until sold out and under 10’s come free. We also have camping passes available for those that want to make a weekend of it.”