A cricket club at the heart of its community is asking residents to help them train local youngsters. 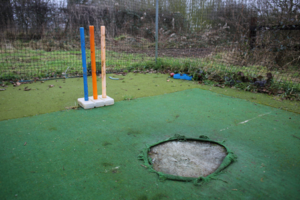 The club has just won promotion to Division One of the North Staffordshire and South Cheshire Division One for the first time in their history and hopes are high for the new season.

Sandbach Cricket Club  is a true community club and success at cricket has helped to fuel major improvements in facilities for local residents. The clubhouse is a hive of activity on non-match days and is used for many events, including the very popular disco for youngsters with disabilities.

“We attract a wide range of community groups to use our facilities and we can only do that if membership is strong,” said Chair Paul Colman. “That means getting the cricketing infrastructure right, so that we can attract new playing talent, particularly in the youth section – the lifeblood of the club.

“Upgrading our nets is integral to this. They are not in the best of shape and that impacts on coaching. New nets will cost thousands of pounds, but we can’t function without them.”

Now the club has launched its first ever public crowdfunding campaign, which aims to raise £10,000 towards the cost of the new nets.

“We’re asking the public to pitch in where they can,” added Paul. “With community use high, we’re hoping we’ll win support from Sandbach and beyond, not just from cricket followers.

“The clubhouse is used several times a week by community groups and the bottom line is we can only do this if the cricketing side of the club thrives. Ultimately, everything hinges on our ability to get new players coming through from our youth section.”

Sandbach CC is also appealing for support from the local business community.

As part of the Crowdfunder, the club will offer incentives, such as afternoon tea while watching a match, campaign t-shirts and hoodies, a coaching session and more as as rewards for funding pledges.

To get involved, please go to the crowdfunding link here –  https://crowdfunder.co.uk/p/SCC-more-than-cricket.

For further information on the campaign and other club matters, please contact  Paul on 07779340276.