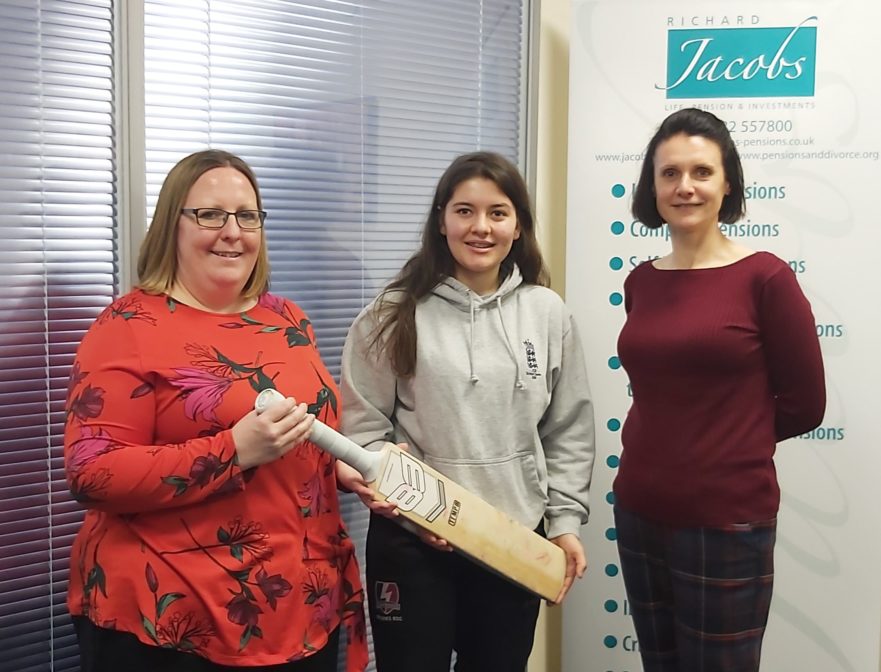 Up and coming England cricketer Ilenia Sims is receiving support from Newcastle-under-Lyme’s Richard Jacobs Pensions and Trustee Services as she pursues a career in a sport which catapulted her great great uncle to international stardom.

Ilenia – known as Lenny – is a rising star in the cricket world and has her sights firmly set on the next Under-19s World Cup 2021 in Bangladesh.

Cricket runs in the family for off spin bowler Lenny as her great great uncle was England pace legend Harold Larwood of “Bodyline” fame and her grandad, dad and uncle were all keen players.

She first experienced the sport with her dad at Newcastle and Hartshill CC before moving to Porthill Park where they have a girls team.

Her talent as an off spinner and mid order batsmen has led to Leni attracting attention from local sports law firm Beeston Shenton who now act as her agent.  Sports lawyer Russell Dutton was looking  for support for Lenny and linked-up with Lymedale Business Park-based Richard Jacobs.

Emily Small, a Director at Richard Jacobs Pensions said: “The business is named after our founder Richard, but these days we are a female led practice and the prospect of helping a local young woman sports person appealed to us. We have agreed to sponsor Lenny’s equipment in 2020 and we’ll be cheering her on as she prepares for a big summer and then the World Cup next year.”

Lenny, who will complete her A-levels at St Joseph’s College, Trent Vale, this summer, hopes to turn her talent for cricket into a full time career. She is part of the England Under-19s Academy and along with the World Cup, she has her sights set on gaining a contact with a regional team when the new The Hundred tournament launches.

“I play women’s and men’s cricket at Porthill Park and train with the women’s regional academy at Loughborough,” said Lenny, who also takes part in one to one coaching with former Northamptonshire, Nottinghamshire and England cricketer Jason Brown from Newcastle-under-Lyme.

“There’s a lot of family connections to cricket but I’m the first woman to play. Harold Larwood was my great great uncle but I have always been quite small, so decided to concentrate on off spin bowling and I really enjoy it. I’d like to thank Richard Jacobs Pension and Trustee Services for their support.”

Russell Dutton said: “Lenny’s got a lot of talent and also works really hard to reach her goals. She’s recorded some fantastic statistics, such as taking 5 wickets for 18 runs for Staffordshire against Durham and she was named Most Promising Senior Female in the Staffordshire cricket awards.”