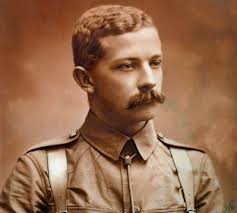 An exhibition is to be launched paying tribute to Major Cecil Wedgwood, a war hero and Chairman of the world renowned Wedgwood company, is moving to the company’s museum from August 8.

Cecil Wedgwood died 100-years-ago leading his volunteer brigade over the top in the Battle of the Somme. He was 53-years-old and had already served with distinction in the Boer War.

Major Wedgwood also served his community as the first Lord Mayor of the City of Stoke-on-Trent.

The Forward North Staffords exhibition – funded with the support of a £10,000 Heritage Lottery Fund grant – is the culmination of a history project chronicling Major Wedgwood and his 168 troops, many of whom worked for the iconic pottery firm.

“Forward North Staffords” are said to be the final words of encouragement from Major Wedgwood as he led his men to war. He lost his life on July 3, just three days into the battle.

The exhibition comes to Barlaston following a successful launch at the Staffordshire Regiment Museum, Lichfield and forms part of a partnership project between the two museums and Inspired Film and Video.

The Stoke-on-Trent based film company has been commissioned to make a documentary on Major Wedgwood which is being narrated by his great great nephew, Tom Wedgwood.

Tom Wedgwood said: “”I’m delighted to have the opportunity to be involved with this project and present this film about Cecil Wedgwood and the men from the Wedgwood Factory who fought in the Great War.

“These great stories of social conscience helped to make Wedgwood the company that it is today. The sacrifice made by these men and the impact that they had, not only on the factory but also on the community, is critical to our understanding of the bloodiest conflict of the 20th century.

“This is an incredible opportunity to find out more about the response of  the Wedgwood family and the workers from the factory during these very challenging times.”

Daniel Stubbs, a Director of Inspired Film and Video, added:  “We have filmed on the battlefields of the Somme and interviewed family members of the Wedgwood soldiers to pay tribute to Major Cecil Wedgwood and all who served under him. It is a fascinating and inspiring story which deserves its place in our local and national history.”

For media enquiries contact Nigel Howle by phone on 0776 204 3436 or emailnigel.howle@howlecom.co.uk