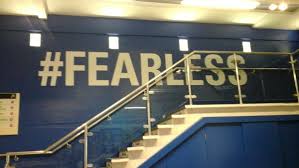 The Stoke-on-Trent based company is a seasoned campaigner at Premier League level as it produces regular footage from the top English league for Danish TV.

And Inspired’s latest success has seen them working on the Fearless Foxes exhibition which celebrates the incredible rise of Leicester City from relegation favourites to Premier League champions.

“We followed the Leicester story as the season unfolded as we report on the Premier League for Channel 6, in Denmark,” explained Inspired Film and Video Director, Michael McDonald.

“This meant that we have been able to use fan interviews taken throughout the season, from last August when many feared another relegation struggle through to the sheer delight of finishing the season as Champions.”

Inspired have won acclaim for their documentary and promotional film work and have now begun the production of 360 degree virtual reality films.

A virtual reality tour of Leicester City’s King Power Stadium is currently in production as a major addition to the films created by Inspired for the Fearless Foxes exhibition.

Significant investment in new staff and equipment has seen Inspired grow in 2016. The company now has eight staff members based at Federation House, Stoke.

Work on the Leicester City story is the latest part of a successful move into the sports market by Inspired.

Michael said: “Sport has become an increasing part of our offer and our growing expertise is gaining the attention of from football clubs, other sports and sports manufacturers.

“We’ve worked in football a lot with Stoke City, West Bromwich Albion, Newcastle United and now Leicester City as well but are also working in sports like hockey and are off to work with some Irish rugby clubs shortly.”

“The growth in 360 degrees filming is proving ideal for work in the sports performance sector as sporting clubs look to gain an armoury of statistics in a bid to find a crucial edge over their rivals.”

To find out more about Inspired Film and Video’s work, please go online to http://www.inspiredfilmandvideo.co.uk/.

More information about the Fearless Foxes exhibition can be found at http://www.visitleicester.info/things-to-see-and-do/arts-museums/exhibitions/fearlessfoxes/

For media enquiries please contact Nigel Howle by telephone on 0776 2043436 or email nigel.howle@howlecom.co.uk