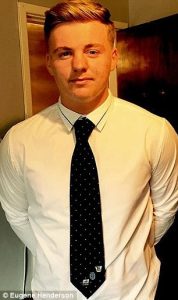 Jordan’s friends and family will parade the flag on the pitch before the Potters’ final home game of the season.

The flag will help to raise awareness for CRY (Cardiac Risk in the Young), a charity set up by Jordan’s family after his death from an undiagnosed heart condition.

Jordan, from Biddulph, died at just 17-years-old after suffering a heart attack when he dived into a swimming pool while on holiday in Turkey. He was a very promising footballer, playing for age group teams at Leek Town and being referred to the Stoke City academy, and an avid Stoke City fan.

Fellow Stoke City supporter Steve Ward, Director of Norton based Graphix, leapt at the chance after Jordan’s family appealed for someone to design a flag via Twitter.

“It is for a fantastic cause,” said Steve. “The death of young people through undiagnosed heart attacks is far more prevalent than many of us realise, with around 12 deaths in the UK each week.

“We are thrilled to be able to provide a flag free of charge to the Burndred family.”

Jordan’s mum, Nicola said: “Stoke City have been very kind and are allowing us and other family members to enter the ground around 1.30pm to have pictures taken by stoke with the banner by Jordan’s seat. They will also be playing the Bob Marley song Three Little Birds before kick-off, as this was a song Jordan played often.

“Stoke City have been great. Sharing our message on social media and it as fantastic of Graphix to provide the banner”

The Burndred family have so far raised more than £20,000 for cardiac screening days.

The banner will be on display at Knypersley Cricket Club on 24 June to mark the installation of a defibrillator, paid for by Jordan’s family.

Graphix are experts at working with the Stoke City logo. They provide signage for both the Britannia Stadium and the club’s Clayton Wood training complex.

Details on how to donate to CRY can be seen online here: http://www.c-r-y.org.uk/memorial-funds/jordan-burndred/