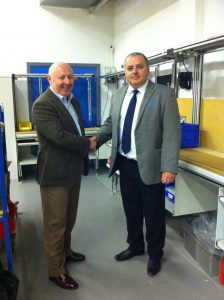 A Community Interest Company, based in Longton, is working towards building a wide client base with the help of a business mentor.

Ayudante, which means helper in Spanish, is a social enterprise offering jobs and work placements to disadvantaged people, including those with disabilities and the long-term unemployed.

It was founded by David Wells, a former Remploy account manager, and employs six members of staff who were all made redundant when Remploy shut its factory in December 2012.

The company operates from part of the former Wedgwood factory showroom and is able to provide a variety of subcontract manufacturing activity for businesses across the country.

With the help of Let’s Do Mentoring’s Adrian Allen, the company is implementing a marketing strategy aimed at promoting the business.

“I believed in what Remploy set out to achieve and I felt it was a service which was still badly needed, which is why I founded Ayudante,” explained David.

“I decided to get a mentor as a result of becoming a member at the Chamber of Commerce. Probably the biggest impact Adrian’s had so far has been his ability to help me to focus on the business as a whole, instead of getting caught up in its day-to-day running.

“Adrian’s created an environment where we set goals and work towards achieving them; it’s definitely driven me to move forward with the business.”

With a background in business development and experience of marketing, Adrian has been able to help David create a business plan and implement a low cost marketing strategy.

“When I first met David I was impressed with his passion and I could see that the business had the potential to grow,” said Adrian.

“We started by going back to basics and assessing the foundations of the company, one of the initial suggestions I made was for David to employ someone to take care of the finances, giving him the freedom to focus on the business.

“The next step was to develop a marketing strategy aimed at raising the profile of Ayudante and I showed David how social media could be used to achieve this.

“David has a great belief in the company and is enthusiastic about what it can achieve; having a mentor has helped him to gain some perspective on the business so that he can successfully drive it forward.”

Ayudante also offers training facilities and wants to work with growing companies to support work experience opportunities and apprenticeships. So far, 15 people are taking part in a work placement via Ayudante with a further six people employed on its own site in King Street.

Staffordshire Chambers of Commerce recently won ERDF funding to extend the Let’s Do Mentoring service from North Staffordshire to the whole county.

Experienced business people volunteer their time and expertise to offer support and guidance to companies across Staffordshire.

Businesses who believe they can benefit from a mentor or would like to become a mentor, should contact the Chamber Business Services Team by emailing johnthompson@nscci.co.uk or telephoning 01782 213929.

For media enquiries contact Nigel Howle by telephone on 07762043436 or email, nigehowle@o2.co.uk