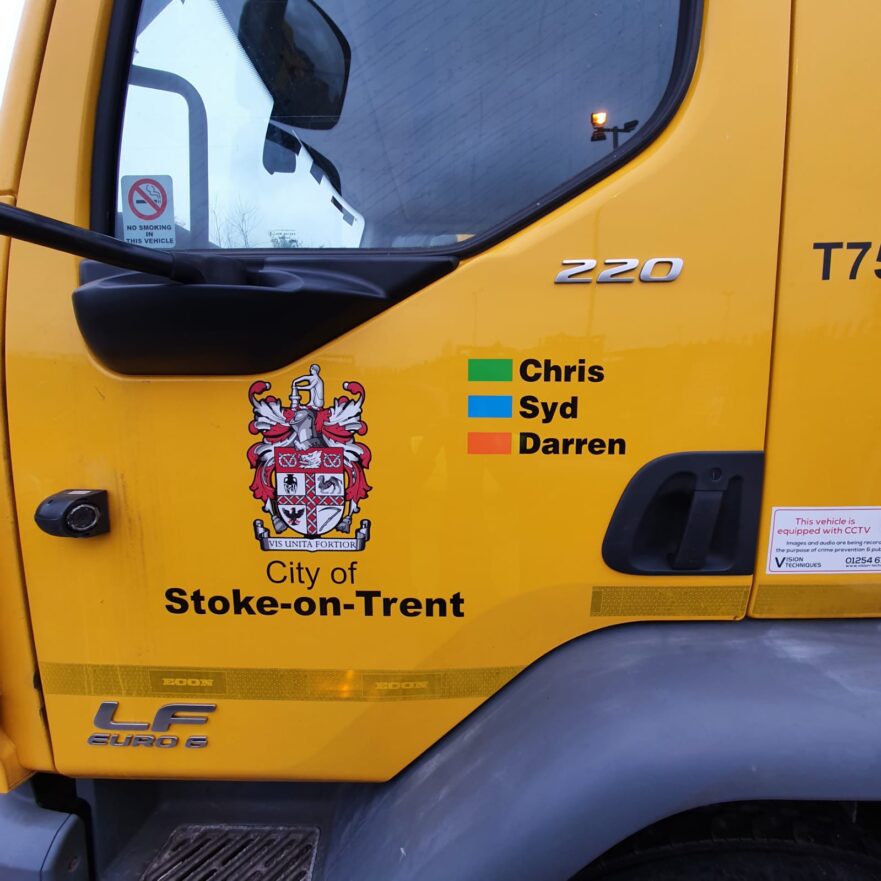 Stoke-on-Trent design, print and signage specialists Graphix has worked with the City Highways team on a project to help the gritting team communicate well with local residents this winter.

Graphix have added vinyl graphics on the crew cabs to provide clear identities for the city’s seven gritting lorries. Each cab now has the first names of the crew displayed on both the driver and passenger doors and the information is colour coded. There’s also clear new identification markings added to the front and rear of each gritting lorry.

Steve Ward, Managing Director at Graphix, said:  “The highways team had a bright idea to give each gritting lorry an identity as a way of identifying them to the city’s residents. They’ll be communicating by social media to say, for example, the blue team are out tonight gritting in certain postcodes and then residents can give feedback.

“We’re used to branding teams of vehicles, for example, this summer completing the graphics on 300 vehicles for the city’s Unitas housing maintenance service, and we were pleased to get on board with the highways team. The gritting lorries branding needed to be completed quickly, to be ready for the first cold snap of the winter, and we have the capabilities to act swiftly, with everything being prepared and printed in house, ready for installation at the highways depot.”

Graphix are branding, design and print specialists based at Norton, Stoke-on-Trent. Founded by brothers Steve and Simon Ward in 1983, the company is an approved supplier to Stoke-on-Trent City Council. Graphix work with companies large and small across the UK and have long-standing relationships with bet365 and Stoke City FC, where they are the football clubs official print and signage partner.