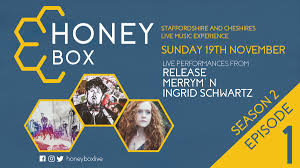 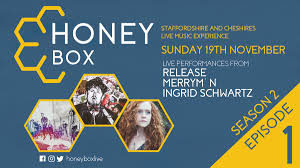 A live music show, perhaps best described as North Staffordshire’s answer to Later…with Jools Holland, is set for its second season.
Honey Box showcases the area’s music scene and is filmed live at King Street Studios, Newcastle-under-Lyme.
A new run of shows – streamed live on Facebook – begins on Sunday, 19 November.
Each episode is filmed in front of a live audience and features three acts of often contrasting styles. Alternative band Release, singer songwriter Merrym’n and Ingrid Schwartz, a folk. Blues and rock influenced singer, make up the line-up for the first show.
HoneyBox Live is the brainchild of co-producers Lee Barber, of music and Peter Herbert both major cheerleaders for the North Staffordshire music scene.
“I have spent much of my life producing live performances from opera to contemporary dance, but live music is my first love,” said Peter. “Honey Box allows our team the pleasure of working as a huge cheerleader for the local music scene.
“PH Productions launched King Street Studios in 2016 and the large performance space in the building allowed us to launch Honey Box in 2016. We have a live audience for each show and the reaction to our first run of performances was excellent with many audience regulars coming along to each show to enjoy an eclectic musical experience. Honey Box provides a deliberately diverse musical menu, mixing up rock and pop genres, so we may have a singer songwriter, a band and an electronic act on the same episode.”
Peter produces Honey Box alongside Lee Barber of locally-based music promotion company Rebel Bear.
A team of up to 12 volunteers works on each show, including presenters Ben McManus and Leah Hamer, and there is a bar, provided by BottleCraft, of Piccadilly, Hanley.
Tickets for the hour-long live show are available via the Event Brite ticketing platform, see https://www.eventbrite.co.uk/e/honeybox-live-series-2-episode-1-tickets-39556187622.
The popularity of Facebook has made it a popular platform on which to livestream events to an international audience. Said Peter: “The first HoneyBox Live shows were streamed on to our own website but the rise of Facebook live streaming has allowed us to grow our audience. We have a HoneyBox Live Facebook page and, after a few weeks, we take the performances off Facebook and upload them to you Tube as a lasting record of the show.”
Peter has worked across a wide range of roles in arts and entertainment over more than 30 years, and founded PH Production Services Ltd in 2000. The company works in the arts arena, producing events such as the Chester Mystery Plays, and with businesses and charities on corporate events.
To find out more about PH Productions, please go online to www.phproductionservices.co.uk
ENDS
For media enquiries, call Nigel Howle on 0776 2043436 or email nigel.howle@howlecom.co.uk