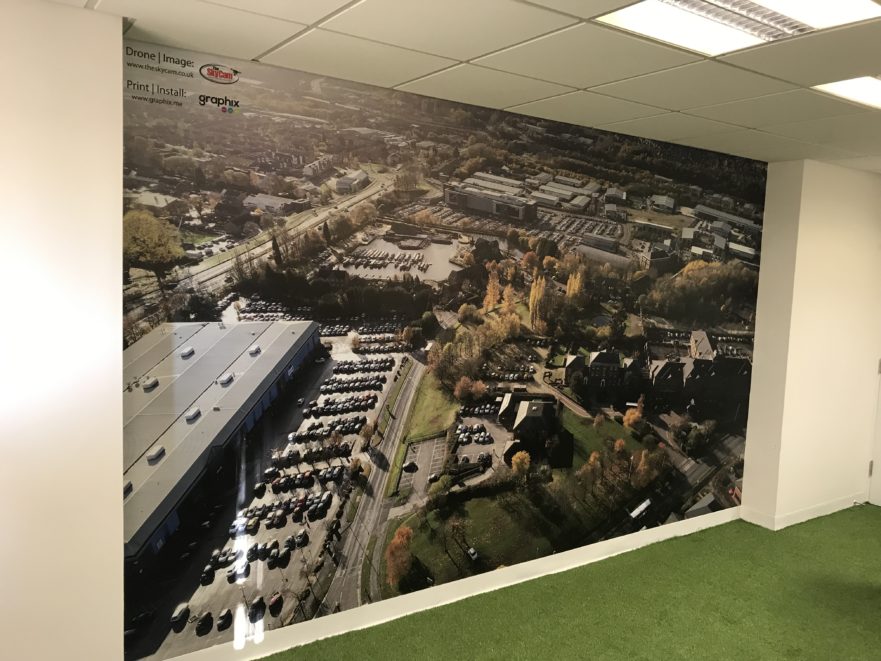 With pic of the photo now installed at Staffordshire Chambers of Commerce.

A spectacular aerial photograph of Festival Park has been donated to Staffordshire Chambers of Commerce by professional drone pilot Nigel Woodcock.

Nigel, of The Sky Cam North Staffordshire, teamed up with print, design and signage specialists Graphix to cover a large expanse of wall at Commerce House with the 3,975mm x 2,300mm image.

Civil Aviation Authority approved pilot, Nigel said: “The photo clearly shows Commerce House and the expanse of Festival Park. It is fascinating to see how the expanse of office and retail buildings have grown on land that once housed Shelton Bar steelworks.

“The area was reclaimed for the National Garden Festival in the 1980s before being regenerated for offices, shops and entertainment. The drone image clearly shows how successful this regeneration has been with buildings now extending into the Etruria Valley following recent developments close to the A500.”

Nigel was going to offer a framed print to the Chamber but after telling Steve Ward, Managing Director, of Graphix about the photo, the project grew in size.

“I suggested we could work with Nigel to come up with something that would have a real impact,” said Steve, “We offer a single source solution for design, print and signage and have the staff and capacity to carry-out extremely large print work.

“The image has been printed on high-spec vinyl wallpaper with a matt finish to reduce reflection and glare. Our design team ensured the artwork was to scale and it was printed in a series of panels. Our signage team then ensured it was installed effectively, placing each panel in place and cutting to size.

“The overall effect is stunning and the Chamber staff are thrilled with it.”