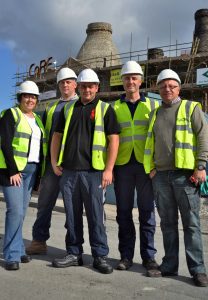 A growing North Staffordshire roofing business has won two contracts to help preserve the industrial heritage of the Potteries – and the owners are keeping the work in the family.

Rydale Roofing will carry out re-roofing work on the Grade Two Listed Enson Works at Longton and on historic terraced homes in Middleport and Hanley.

The Enson Works is being restored as part of the CoRE (Centre of Refurbishment Excellence) project to create a training, conference and exhibition space for companies working in the renewable energy industry, while the homes in Port Street and Burgess Street, Middleport, and Balfour Street, Hanley, are being renovated by the Prince’s Regeneration Trust via the Red Brick Green House Project which was part of the former North Staffordshire RENEW programme.

The Trust, set up by the Prince of Wales, is working in the area after it helped to save the historic Middleport Pottery.

Rydale Roofing, of Newcastle-under-Lyme, was founded by husband and wife Mick and Julie Mirowski, after Mick lost his job as a miner during the pit closure programme in the early 1990s.

And work on the two projects will be a family affair as Rydale is working in partnership with joinery specialists, J & R Construction, run by John McAdam and their son, Ryan Mirowski.

Julie said: “Rydale Roofing was set up in North Staffordshire and all our workers are local people and it gives us great satisfaction to be chosen to work on two major heritage contracts in the area.

“It is pleasing to see that local companies can win these contracts especially those in the public sector such as CoRE. We have also recently worked with Aspire Housing on housing schemes in Newcastle borough.

“Rydale Roofing is a family business, named after our sons Ryan and Dale.  Dale works with us as a roofer and it is great to have Ryan on board as part of J&R Construction for the contracts.”

Both projects require Rydale Roofing to source and work with heritage products as the tiles must replicate those used in the original builds.

Rydale Roofing is working as a sub-contractor on both projects. Well known North Staffordshire firm Seddon is the main contractor on the Middleport Homes, while Rydale has been contracted to carry-out work by John Paul Construction on the CoRE project.

Rydale Roofing was launched after Mick, a former miner, lost his job during the pit closure programme in the early 1990s.

The company takes on any size of roofing work from a small leak in anindividual home to major contracts and sub-contracts.

The company recently branched out into the solar energy section, supplying and fitting photo voltaic panels on both homes and larger buildings.

Rydale Roofing won the “micro business” category in the 2010 Newcastle-under-Lyme Business Boost competition. Business Boost is an annual awards scheme sponsored by the public and private sectors to encourage entrepreneurship and job creation among companies in the borough of Newcastle, Staffordshire.