Titanic Brewery is to throw a huge party in aid of local charities as it celebrates its 30th anniversary.
Funfair rides, charity stalls, musicians and a beer tent will take over the brewery’s site in Callender Place, Burslem, on Saturday, November 14.
From humble beginnings behind the Travellers’ Rest pub, Middleport, Stoke-on-Trent, Titanic Brewery has been at the forefront of a revolution in British brewing.
In 1985, the Midlands brewing scene was dominated by brewing giants such as Marstons and Ansells.
But, in 2014, breweries hit a 70 year high with more than 1,400 across the UK. 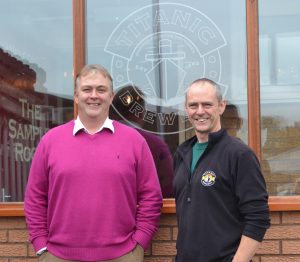 “The brewing landscape has changed completely since Titanic Brewery’s founder John Pazio set up a tiny brewery in 1985,” said Managing Director Keith Bott.
“John was passionate about beer but would never have envisaged Titanic Brewery as it is today. We brew more than three million pints of beer a year and distribute all over the UK and in Europe.
“We have also seen our pub fleet expand from one to nine pubs and have major expansion plans to grow the estate further.”
Keith began his working life as an apprentice brewer under John Pazio. He made the bold decision to take on Titanic with his brother, Dave Bott, after John’s project failed in 1988.
“We originally had one pub, the Bulls Head, Burslem, and I was licensee running the pub and a brewery at the same time,” recalled Keith.
“We were successful in selling our beers to shops and pubs but we also wanted to expand and we worked with a larger brewer, Everards, to open the Greyhound, on the outskirts of Newcastle-under-Lyme in 2007. We quickly followed that with the White Star in Stoke and have continued to expand moving further afield to Stone, Stafford and Leek and now into Cheshire and Derbyshire. We also opened the Sample Room at the brewery in 2014 which we open for brewery tours and events.”
“The Greyhound was the start of a trend which has seen smaller independents link with larger brewers to open pubs with the branding of the local brewery on them.
“We are proud to have been at the forefront of that movement and I’m personally pleased to say that we have been able to rescue several derelict pubs.
“Strong community pubs are part of the fabric of British life and give people a place to meet, socialise and enjoy a drink in safe surroundings. I often say that pubs were Britain’s first social network.”
Fittingly, the 30th anniversary year has seen more success with Titanic picking up a Gold medal in the Champion Beer of Britain competition for its popular Plum Porter ale.
An expansion of brewery facilities in 2014 has seen Titanic expand its beer range and venture into the growing craft beer market with beers such as MAP (Mid Atlantic Pale).
Money generated from the birthday celebration will be divided between many local charities.
A list of beneficiaries are still being finalised and are being nominated by staff and friends of the brewery. Local charities who would like to be considered should contact Sam Warrilow – sam@titanicbrewery.co.uk.
The fun starts at 1pm with celebrations running through until 7pm. It will cost just £5 to attend, including a pint of beer. Children (under-16 and accompanied by an adult) will pay £2.50. Tickets are available in advance on line at www.titanicbrewery.co.uk and from the nine Titanic Brewery pubs.
Ends
1985 landmarks:
· Famine in Africa dominated the headlines leading to the global Live Aid concerts
· Everton were English Football League champions
· Lewis Hamilton was born
· Mohammed Al Fayed buys Harrods
· The short lived Sinclair C5 was launched
In Stoke-on-Trent news:
· Port Vale were promoted from Football League Division Four as John Rudge began to exert his managerial influence.
· Stoke City were making a new start under Mick Mills having been relegated to Division Two. They averaged crowds of 8,288 at the Victoria Ground – a far cry from today’s sell out Premier League attendances.
· Alan Hudson, one of City’s greatest ever players retired following injury.
· The hugely popular May un Mar Lady cartoon strip made its début in the Evening Sentinel.

Notes to Editors:
For further information about Titanic Brewery and its award winning beers visit the company’s website at www.titanicbrewery.co.uk Titanic Brewery was founded in Burslem in 1985 and has grown to produce around three million pints of fine ale every year. It is owned by Stafford born brothers Keith and Dave Bott. Keith is a past Chairman of SIBA, the society of independent brewers, and is a Director of Cask Mark, see http://cask-marque.co.uk/.
The brewery name is in recognition of Stoke-on-Trent as the birthplace of Captain Edward Smith, Master of the ill-fated Titanic ocean liner. ​