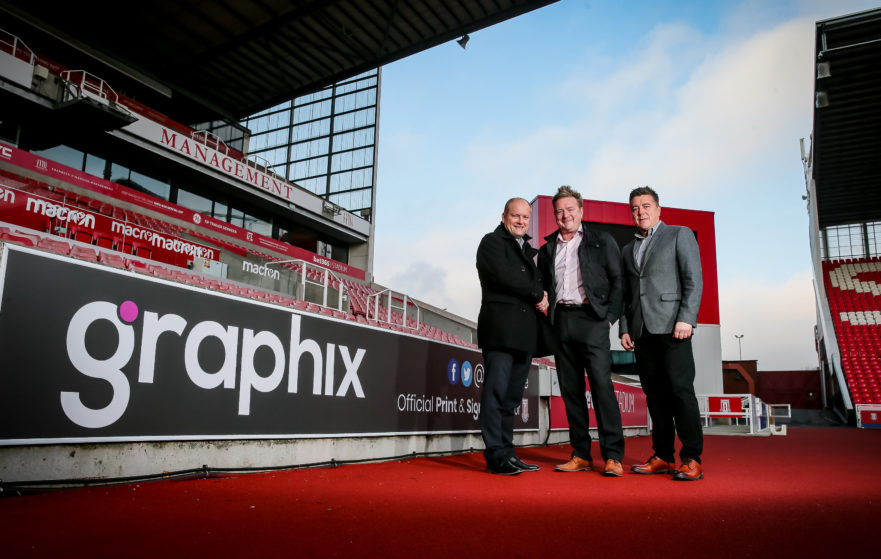 Leading Staffordshire creative company Graphix will have its name up in lights at Stoke City again in the 2020/21 football season after signing a new deal as the Championship club’s official print and signage supplier.

It’s the third successive deal between the club and Graphix, based in the city at Norton. The partnership means Graphix will supply all print & signage at the bet365 stadium, the club’s Clayton Woods training complex and Stoke City FC retail outlets.

Meanwhile, the Graphix name will be amongst advertisers featured on the wrap-around pitch side LED advertising boards, giving Graphix exposure both to supporters at the stadium – once covid-19 restrictions ease – and TV audiences.

Steve Forrest, Business Development Manager at Stoke City FC, said: “We have enjoyed a great working relationship with Steve and the wider Graphix team for a number of years, so much so that they are now moving into their third season as Stoke City’s Official Commercial Print and Signage Supplier.

Knowing that we can count on them to consistently produce, deliver and install quality print and signage in a fast and efficient manner fills us with great confidence. Stoke City enjoys a great relationship with the team at Graphix.”

Graphix hae enjoyed a productive, long-term relationship with the Potters – and the results are visible to all visiting the stadium, the Clayton Woods training complex, or the club stores.

Every sign from the striking branding on the front of the stadium, through giant wayfinder boards on the perimeters of the bet365 stadium, to the numerous concourse safety signs are completed by Graphix for the Championship club.

Steve Ward, Managing Director at Graphix, said: “We’re delighted with our continuing association with Stoke City, it’s fantastic for us to be recognised by the club for all our hard work and dedication. We’re super proud of our amazing team here at Graphix and have been since we founded Graphix 27 years ago from our parents’ home.”