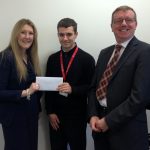 Former garage worker Justin Smith is celebrating after a change in career plans resulted in him being crowned as Temp of the Year.

Justin, aged 21, of Wilmslow, Cheshire, was placed as a temp at the Information Commissioner’s Office in his home town by North Cheshire recruitment agency, Brampton Recruitment.

His “can do” attitude led his boss, Paul Wilson, to nominate him for Brampton’s Temp of the Year Award and Justin scooped the first prize and £50 in High Street shopping vouchers.

Paul, Facilities Manager at the Water Lane, Wilmslow offices, said: “I nominated Justin because he is always enthusiastic and is happy to go the extra mile to complete jobs properly. He has exceeded all expectations and deserves the recognition from his agency, Brampton Recruitment.”

Justin joined the Facilities Management team at the Information Commissioner’s Office in February, 2012, and works on a wide range of building maintenance tasks.

He said: “I previously worked in a car body shop so it is a major change. I really enjoy it and I like to work hard. I was really pleased to be nominated but didn’t think I would win – it is a great bonus just after Christmas.”

Kerri-Ann Hargreaves, Knutsford Branch Manager at Brampton Recruitment, said: “The feedback we get about Justin’s work is outstanding and his can do attitude makes him a worthy winner.”

For more information on Brampton visit www.bramptonrecruitment.co.uk or call 01782 667591.

Photo: from left to right, Kerri-Ann Hargreaves of Brampton Recruitment, temp of the year, Justin Smith, and Paul Wilson, Facilities Manager at the Information Commissioner’s Office.