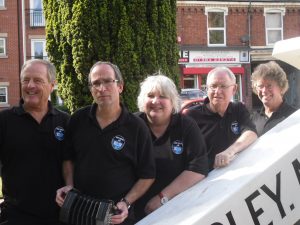 A landlocked brewery has taken the unusual step of sponsoring a sea shanty folk crew and their first album.

Titanic Brewery, based in Stoke-on-Trent, has  backed the production of a CD by the Nine Tenths Below shanty crew.

The CD – Songs of Ale and Sail – will be launched during a tour of Staffordshire pubs on Friday and Saturday, 23 and 24 March.

The shanty crew will perform at the White Star, Kingsway, Stoke, on Friday, 23 March at 8pm.

On the following day they will then give short performances during a whistle stop tour taking in the Sun Inn, Stafford (12 noon), the Royal Exchange, Stone (12.45pm), the Greyhound, Hartshill (2pm), the Bulls Head, Burslem (3pm), the Huntsman, Cheadle (3.45pm), and the Roebuck, Leek (4.30pm).

Nine Tenths Below are made up of folk scene regulars Barbara and Andy Hindley, Pete Hopkins, Len Devey and Tom Perry.

They first performed as Nine Tenths Below at a variety of festivals last year and already have 15 festival bookings for 2012.

Malcolm Hawksworth of Titanic Brewery said: “Nine Tenths Below are talented performers who bring great energy to their repertoire of sea shanties and traditional drinking songs.

“We believe that Titanic is the only brewery in the UK to sponsor a shanty crew and we are delighted to have been able to help with the CD Songs of Ale and Sail.”

Titanic Brewery is named as an affectionate tribute to the fact that Captain Edward Smith, Master of the Titanic, was born in Stoke-on-Trent.

All the brewery’s beers have names with links to the sea or the Titanic and the shanty crew shares a name with the award winning Nine Tenths Below IPA which was launched in 2011.

Samples from the CD are available online at the group’s website: www.ninetenthsbelow.co.uk.

The new CD can be bought from Titanic Brewery, any Titanic Pub, other selected pubs, or it can be ordered on line from the website above.

Titanic’s full range of beer can be seen on the company’s website at www.titanicbrewery.co.uk

Titanic Brewery was founded in Burslem in 1985 and has grown to produce more than two million pints of fine ale every year. It is owned by Stafford born brothers Keith and Dave Bott. Keith is Chairman of SIBA, the society of independent brewers.