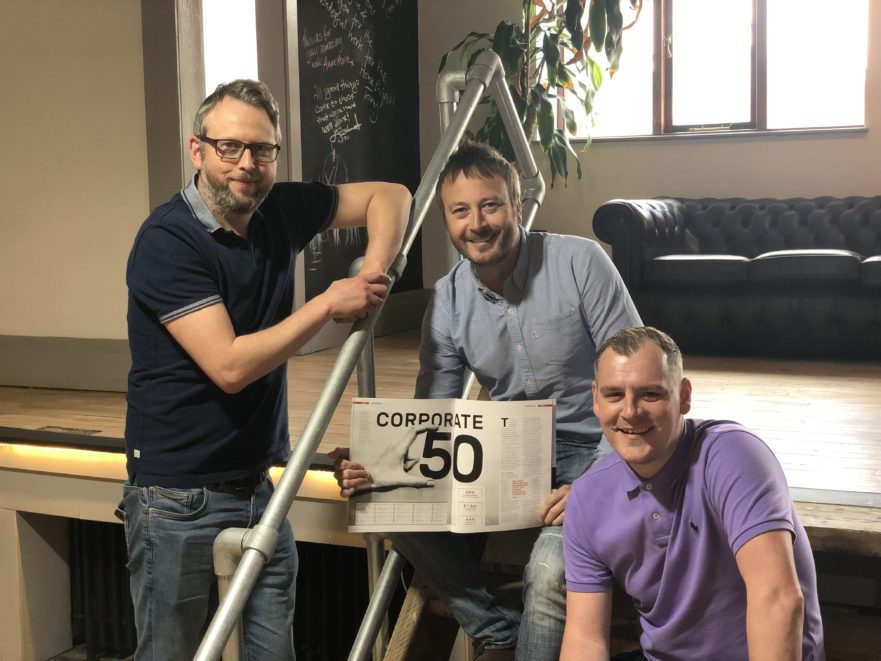 A film production company named among the best in Britain is celebrating 15 years in business and forecasting major future growth.

Reels in Motion is flying the flag for Stoke-on-Trent and competing with big city film studios in London and the South East. Its five year plan aims to more than double their staff and achieve a £5 million-plus  turnover by Reels in Motion’s 20th anniversary.

Founded by Matt Hubbard, Phil Bland and Joe Gordon in 2004, Reels in Motion is the only Staffordshire-based business to get recognised in the prestigious Top 50 Production Companies, compiled by Televisual Magazine.

From small beginnings, the company has forged a reputation for creative corporate film making, working with household names including JLR, Michelin, Alton Towers and the British Chambers of Commerce.

The trio of former Staffordshire University film students have built a talented 8-strong team and invested heavily in state-of-the-art studios.

They moved to the Production House, Tunstall, in 2017, having invested more than £250,000 to transform the old Ryan Hall workingmen’s club into new offices and a production centre complete with recording booth, green room, video studio, editing suite and nine-seat mini cinema.

Matt said: “We have come a long way since graduating from Staffordshire University when we took a small office in the University’s business hub off Leek Road, Stoke.

“We dared to think big and it was always our aim to bring big city production values to film making in Stoke-on-Trent. The Production House is perhaps our biggest achievement as it has enabled high quality films to be made in studios in the heart of the Potteries.

“Staffordshire has long been known as the creative county and we’re proud to be playing our part in continuing that creativity in our own artistic field.

“We see the Production House as a statement of intent for our city and Stoke Studios is a fantastic facility that we want other film makers and photographers to take advantage of. Staffordshire University produces many talented film makers and we are flying the flag for that and providing facilities of a quality that means up-and-coming producers no longer need to travel to bigger cities to pursue their craft.”

Matt said that gaining recognition as a Top 50 Production Company was a trigger for further growth.

“The Goldman Sachs programed made us think and behave like a big production house.  It helped us set out our growth strategy.  We want to be the place for developing talent and have some of the country’s best here in Stoke on Trent.  Our aim is to grow the team to 25 with a turnover in excess of £5 million in 5 years time and continue to be recognised for our standard of work and client satisfaction.”