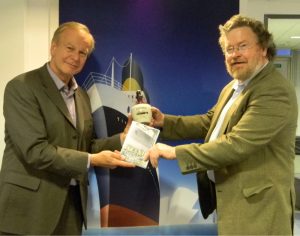 Professor Ray Johnson MBE and Malcolm Hawksworth of Titanic Brewery at the launch of a new documentary on the Titanic.

Film maker Ray Johnson has made a new documentary to mark the centenary of the launch of the Titanic.

The film is sponsored by Titanic Brewery, Stoke-on-Trent. The brewery is named in honour of Captain Edward Smith, Master of the Titanic, who was born in the Potteries.

Captain Smith went down with his ship after it sank on its maiden voyage. His last words are believed to have been “Be British.”

A commemorative beer in a special Wade ceramic bottle has been produced to mark the Titanic’s centenary.