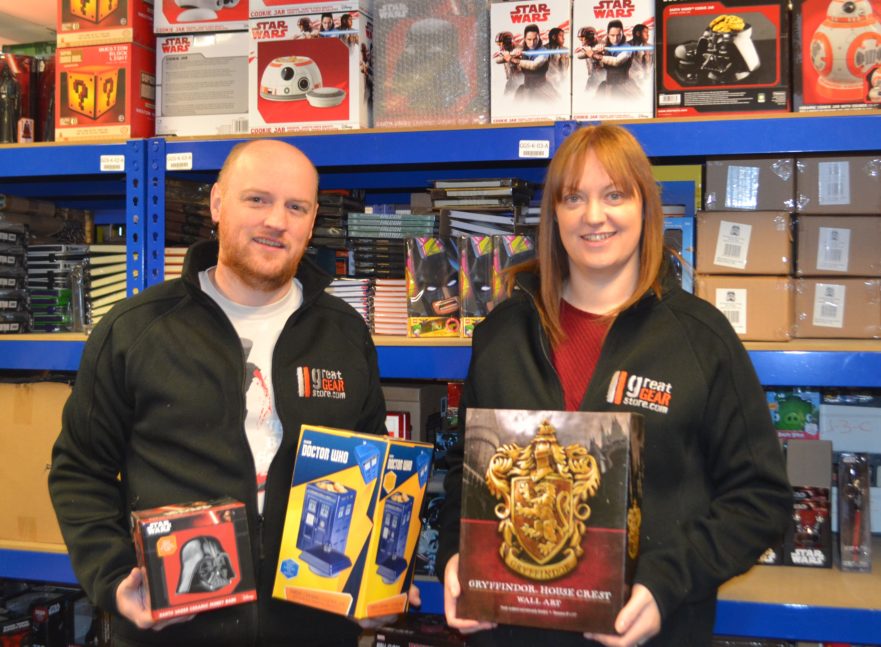 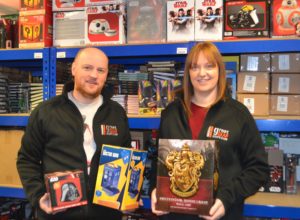 A Staffordshire entrepreneur is living out his childhood dreams after buying the Great Gear Store and moving the business to Leek.
Carl Barlow has created six jobs in his home town and is using his skills as a digital marketer to grow the business.
The Great Gear Store is every schoolboys dream, with thousands of collectable items in stock such as Star Wars figures, Harry Potter wands and pop and rock merchandise.
“I bought the business as a going concern in late Autumn and was immediately thrown into a whirlwind of Christmas sales, shipping out over 5,000 items from Beatles memorabilia to up to the minute TV themed memorabilia from programmes such as the Walking Dead.
“It has been an amazing start and my eight-year-old son now thinks Santa works for the Great Gear Store!”
Carl bought the Great Gear Store and all its stock from its former owners in Kent. He explained: “My background is in digital marketing and I wanted to invest in an online business that can trade from anywhere. I have relocated the head office to Leek, recruited staff and brought in my wife Jane to help run the business. I’m now planning further growth by revamping the Great Gear Store website and exploring new sales platforms.”
Growing the online side of the business fits seamlessly with Carl’s expertise. Having worked in the digital team at the former Britannia Building Society headquarters, in Leek, Carl founded an online digital marketing company, Digital Eyes Media, in 2012.
Carl added: “The Great Gear Store is already a good business but there’s even more potential for growth through improvements to the website and seeking out new digital sales platform. I’m continuing to run Digital Eyes Media, an online marketing company, and the Digital Eyes team will revamp the Great Gear Stores online presence.”
Further developments for the future include the possibility of a trade counter in Leek and Carl is also planning to introduce a Great Gear Store loyalty club where members can pay a fee and sign up for monthly memorabilia, such as band t-shirts.
“I believe this business has great potential. The market for memorabilia is continually growing and we have seen the growth of Comicon events across the UK in recent years.
“The breadth of stock that we hold is huge. There’s a collectors’ market for virtually any theme you can think of and for all age ranges. For example, we have already sold a large amount of John Wayne themed gear, such as wallets, mugs and hip flasks, and there’s also more than half a century of pop and rock memorabilia, with collectors wanting to buy items from different eras, from Elvis, through Motorhead, to Oasis.
“Star Wars is a big market, particularly with a new film out there, and Harry Potter, with everything from a £5 branded notebook to a set of “Dumbledore’s Army” replica wands for £150.”
To find out more about the Great Gear Store please go online to www.greatgearstore.com.
ENDS
For media enquiries contact Nigel Howle – 0776 20434336, nigel.howle@howlecom.co.uk.