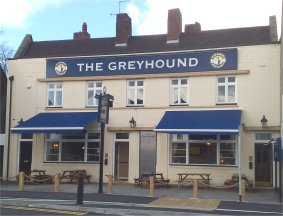 Walking to the pub will take on a new meaning for a group of beer lovers.

Lee Farrington, landlord of the Greyhound, Hartshill Road, Newcastle, is encouraging friends and pub-goers to join him on a 23 mile pub crawl between Titanic Brewery’s five inns.

And their efforts are expected to raise hundreds of pounds for the Douglas Macmillan Hospice, Blurton, Stoke-on-Trent.

The marathon walkers will set off from the Sun Inn, Stafford, at 9am on Saturday, 27 August and hope to arrive at the Greyhound at around 8pm having called in at the Royal Exchange, Stone, the White Star, Stoke and Burslem’s Bulls Head.

“We are looking for as many people as possible to join us,” said Lee. “It is a long trek but at least people will be able to get a drink or two along the way.

”As a beer lover, I have completed the odd pub crawl but never anything on this scale. But we will be raising money for our local hospice and would urge people who cannot make the walk to spur us on through sponsorship.

“In common with many people, I have seen family and friends suffer with cancer and I kniw what a fantastic job the staff at the Douglas Macmillan Hospice do.”

The event will finish with a celebration buffet for the walkers hosted by Lee, at the Greyhound.

Titanic Brewery Director Dave Bott said: “This is a fantastic effort by Lee and I would urge everyone to get behind his fund raising efforts.

“We held the Titanic Trek in 2009 from the Royal Exchange, Stone, to the Bulls Head, Burslem, but the opening of the Sun Inn, Stafford has added an extra dimension. The addition of the Roebuck in Leek to our pub fleet later this year could prove a step too far.”

more than 2 million pints of fine ale every year. It is owned by Stafford born

brothers Keith and Dave Bott. Keith is Chairman of SIBA, the society of
independent brewers.

Captain Edward Smith, Master of the ill fated Titanic ocean liner. The Titanic Brewery website can be accessed at www.titanicbrewery.co.uk

Until 2007, the brewery had just one pub, the Bulls Head in Burslem, but has embarked on a programme of expansion which has seen new pubs opening across Staffordshire.

The brewery has a fleet of five pubs –

Titanic Brewery recently announced the acquisition of the Roebuck, Leek, which is scheduled to open in the autumn following refurbishment.