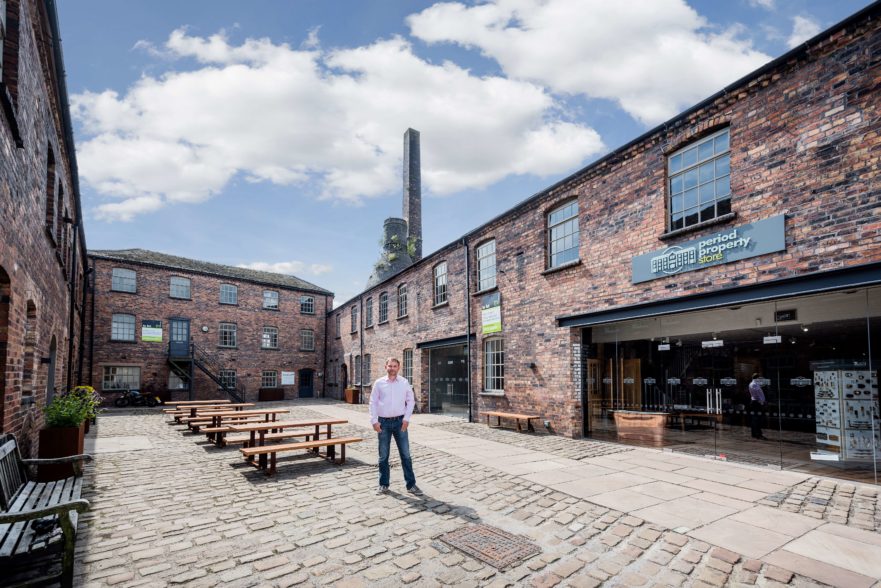 A 10-year labour of love is almost complete as Mark Milner embarks on the final leg of his ambitious project to create a business and retail hub in Longton’s historic Phoenix Works at 500 King Street, Longton.

Mark, the owner of Kirklands Properties Ltd, believes that more than a million pounds in cash, time and labour has gone into creating a mixed-use complex featuring offices and retail space, including a Portmeirion Pottery factory outlet, the Period Property Store, Yes Lease, Centiel UK, Phoenix Home Interiors and the Glost House café.

Now he is set to do it all over again, as a virtually identical space at the Phoenix Works remains derelict.

High quality office space is available at the complex, which was formerly a thriving pottery works and is now born again as a key gateway site for the regeneration of Longton.

New for summer 2019 is attractive outdoor seating in the central courtyard which is available to all visitors and provides an outdoor space to enjoy a drink and a bite to eat for customers of the popular Glost House café.

Mark said: “The Phoenix Works currently has a developed area of around 20,000 sq. ft. with potential space of up to 40,000 sq. ft.  We have developed it gradually, responding to potential demand for space over the past decade.

“Immediate plans involve opening up two storey offices in the far corner of the courtyard which consists of around 6,000 sq. ft, of usable space over two-floors. The space features two historic bottle ovens, which we aim to incorporate into the offices and I’m sure this will be a major talking point and an extremely attractive proposition for potential office users.

“We have worked hand in hand with conservation planners at Stoke-on-Trent City Council to ensure that all restoration is historically appropriate and completed to the highest standards.

“The vast majority of the work has been completed by Kirklands Properties working with local trades, so there’s been hundreds of thousands of pounds invested into local companies, creating jobs and supporting business growth.

“Companies have also grown up here, for example, Digital Balance, a well-known local software developer, was founded here, before outgrowing its offices and moving on.”

Added Mark: “The second courtyard is almost identical to the space we have developed but is currently not open to the public. I believe we will be in a position to start working on opening it up within the next five-years.

Mark has been part of the family business since he started his working life and recalls collecting rents from the pot banks as a teenager.

The Phoenix Works was built by Thomas Forester in 1881 and became a major producer of Majolica. It was bought by the Milner family in 1961 and became home to a community of small pot banks. Much trade ceased in the 1980s and 1990s and the building fell on hard times, before Mark embarked on his ambitious renovation plans.

For further information on the Phoenix Works, please go online to http://www.phoenix-works.co.uk/.