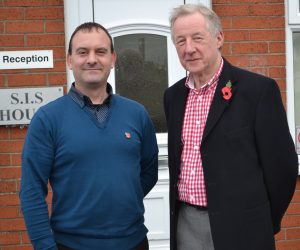 Taking time out may seem a pipe dream for many small business owners. But working with a mentor to achieve a better work-life balance has helped Paul Walters plot a clear path to success for Stafford Industrial Supplies.

“I was running around continually fighting fires and my mentor told me I had to let go and give others space to do their jobs,” admitted Paul. “It has improved my business and improved my health.”

Paul was introduced to mentor Alan Wyatt by the Let’s Do Mentoring programme at Staffordshire Chambers of Commerce.

Founded in 1989, Stafford Industrial Supplies employs eight people from its office and warehouse on the Astonfields Industrial Estate in the County Town.

“The company had been a success but was hit by the recession and by 2010 there was just two of us working here. “We consolidated and started to grow but it became clear that a growth plan had to be put in place.

“Working with Let’s Do Mentoring has really helped with that process. “The first thing Alan said to me was we must plan, plan and then plan some more to create a sustainable business.

“I didn’t really know what I was looking for from Let’s Do Mentoring. At first, Alan just let me talk and was a great sounding board.

“I was able to bounce ideas off him and he would come back with realistic guidance.
“He also helped me to see that I needed to stand back and take a more strategic view, allowing our staff to grow into their roles.

“I now have time to think and time to go out and market the business.”

Paul added: “2015 is proving our most successful year to date and the changes that I have made has led to a very positive team who are driving the business forward.”
Alan said: “When I met Paul, I found a well-run company with impressive products and customers.

“But, it was clear that he needed to plan a way forward and look at how the company was going to grow and where it could target new markets.

“Paul also needed to define his role and – just as importantly – make time for himself and his family alongside his business.

“He’s now more in control of his time and his business is better for that.”

For more information on Let’s Do Mentoring, please contact Mentor Brokers, John Thompson and Leila Green at Staffordshire Chambers on 01782 213929.