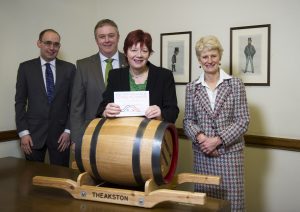 The beer and pub trade is worth more than £30 million to the local economy, Stoke-on-Trent North MP Joan Walley told Chancellor George Osborne.

Ms Walley made an impassioned plea to the Chancellor to scrap the Beer Tax Escalator during a Parliamentary debate.

The Labour MP spoke out on behalf of pubs and Titanic Brewery, based in Burslem at the heart of her constituency.

She told how the 27-year-old Titanic Brewery had grown from small beginnings to employ 130 people.

“My constituency has 93 pubs and one brewery, and I want to speak on behalf of that brewery – the Titanic Brewery.

“It has won awards and works alongside local pubs. The total number of jobs in the beer and pub sector in my constituency is 1,290, of which 668 are direct jobs and 327 are direct jobs for 16 to 24-year olds. It is very much part of local business. The total value that it adds to the local economy is a grand £32.1 million with £0.9 million invested in the local economy.

“I am particularly proud of Titanic, and of Keith Bott and the employees, who play a leading role in the Society of Independent Brewers (SIBA) and have been at the forefront of campaigning for the Government to consider their industry during this economic recession.

“Times have changed since the escalator was introduced, and the Minister should tell us what progress he has made on the review since the last debate in Parliament back in October or November. I hope that he will give assurances on that.

“Titanic plays an important and vibrant role in the life of my constituency. It is 27 years old and has grown from two to more than 130 employees, including 35 jobs in Stoke-on-Trent North alone.

“I draw particular attention to the Bulls Head, where anyone who wants to taste good real ale goes, particularly before a good football match.”

Keith Bott, Director of Titanic Brewery, said: “We would like to thank Joan for campaigning on behalf of the British beer and pub trades.

“We believe passionately that the pub is an important part of Britain’s social factory but the Beer Tax Escalator encourages more people to drink cheap supermarket sold alcohol at home.

“A well run British pub provides a safe environment where people can enjoy food and drink in a social atmosphere.”

“Beer tax will have risen by 50 per cent in the last five years, assuming the duty escalator stays in place after next month’s Budget.  This is hugely damaging to pubs and the local economies they support, which include the independent brewers who supply them with quality craft beers.”