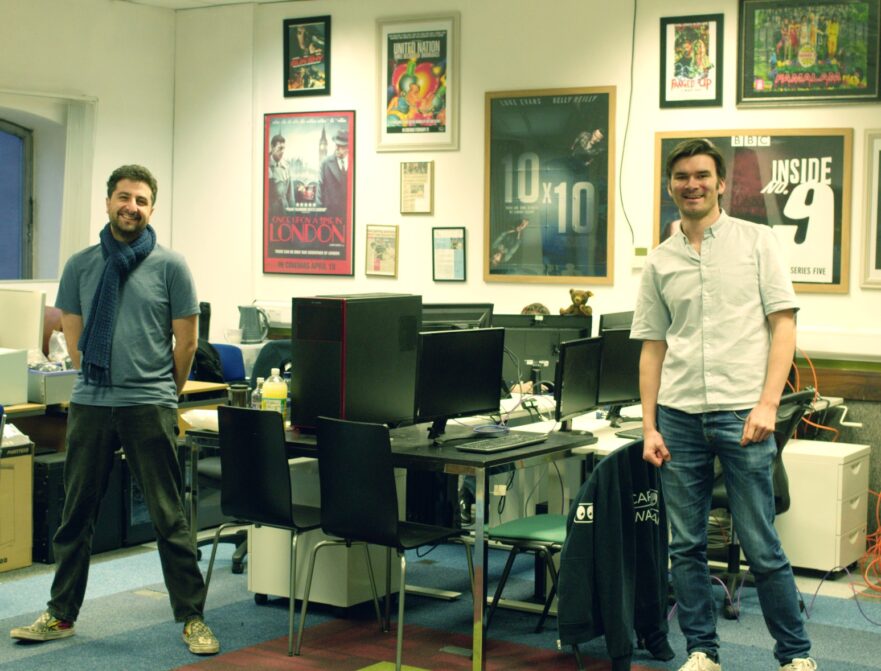 A Stoke-on-Trent animation company has joined forces with international film studio to create a new headquarters and a digital and creative hub for Stoke-on-Trent.

The new complex on Campbell Place, Stoke, features Framescape, a digital and creative hub to be run as a not for profit community asset to benefit young people in the city.

“Stoke-on-Trent was a powerhouse of the first industrial revolution and we’re determined to raise aspirations and make the city part of the new digital revolution,” said Daniel Waterman, of animation specialists Carse and Waterman, the company behind the ambitious development.

Daniel said that work is well underway to transform a disused former NatWest bank into a film and digital skills hub. Carse & Waterman has already begun to move into its new offices on the first floor.

The ambitious vision for the development means that it will be much more than just a home for the animation specialists.

Carse & Waterman has formed a partnership which involves London-based Dreamscape Studios and local company Popcorn Learning Media to develop the building as a creative and digital hub for North Staffordshire.

Framescape, on the ground floor of the development,  is being run as a separate entity on a not for profit basis.  Eric Gresswell, of Popcorn Learning Media, has been appointed a co-director of Framescape, alongside Daniel Waterman.

The Framescape team is working with local MPs and councillors to ensure the project benefits young people in the city.

Framescape is part of a redevelopment of the bank building over three floors. The creative and digital skills hub, situated on the ground floor together with a classroom and a 17-seat film viewing room, will be accessible to anyone with ambitions of a creative industries career.

The not for profit aspects of the ambitious project have won backing from the Stoke-on-Trent Community Investment Fund, while Carse and Waterman and Dreamscape Studios are also investing in the project.

“We see the new development as having multiple level benefits for the city,” said Daniel. “There’s a regeneration element, in that we want to breathe new life into Stoke High Street and renovate a large, disused building. It is also a headquarters for our company, provides production space for Dreamscape and the digital skills hub will focus on raising aspirations and signposting our city’s young people towards potential careers.

“During lockdown, we launched a collaboration with the city’s YMCA to talk about digital skills and we hope that’s just the start. All young people have digital skills nowadays and we want them to think how they can harness them to build a good career.

“Lockdown also highlighted the digital divide with too many families struggling with home schooling due to a lack of access to basic technology. It is an area where we believe we can help.”

Daniel and business partner, Gary Carse, came to Stoke-on-Trent to study at the Staffordshire University Film School and have put down roots in the city.

Daniel explained: “Stoke-on-Trent has always been a hotbed of creativity, from Josiah Wedgwood onwards. There’s no reason why our new creative future shouldn’t involve the digital industries. Young people can use the digital skills they all learn in schools to build a career in film, animation, visual effects, software development and much more.

“We want Framescape to inspire and open a gateway for young people.”

Carse & Waterman has an international reputation as an animation house, working with both film and TV studios and in the commercial field. Daniel added: “We have produced a diverse body of work, not only on TV productions such as Alan Carr’s There’s Something About Movies and acclaimed dark comedy, Inside Number 9, but for commercial clients such as Michelin, the NHS and tourist attractions, including Trentham Gardens.

“2020 has been an odd year and coronavirus has hit many industries hard, but it also gave us time to work on out plans for our new building.”

Dreamscape Studios is currently working with Carse & Waterman on exciting new projects including a children’s TV pilot and an animation series for a more adult market, such as viewers of Family Guy. The London-based company shares Carse & Waterman’s vision to develop the Framework hub, while also gaining a production base in the heart of England.

Work is currently on-going, with Carse & Waterman’s seven-strong team gradually moving in over the next few months. The team worked from home during lockdown, taking with them computers from the company’s former offices at Federation House, Stoke.