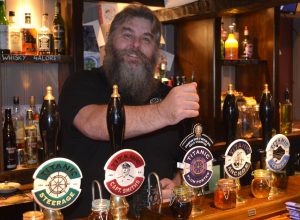 new landlord is looking to work with Congleton and South Cheshire food producers as he brings a totally local concept to Ye Olde Kings Arms.

He has revamped the pubs menu and launched a campaign to serve as much local produce as possible.

“I have already discovered Mossley Premium Meats, an amazing butcher based at Congleton Garden Centre and they are supplying all our rump steak,” said Andy.

“But that is just the start as I will be looking to buy vegetables from the town’s market and I want to speak to Congleton Town Council about a localism campaign.

“I know that the Roebuck, Titanic Brewery’s pub in Leek, benefits from the strong Totally Locally movement in the town and I want to see people buying as much local produce as possible.”

An experienced landlord, Andy believes in greeting all his customers where possible and being available to hear their praise and any grumbles.

Food at the pub will be mainly traditional including steaks, salmon and fish and chips.
Titanic Brewery rescued Ye Olde Kings Arms in late 2014 and undertook a regeneration programme to restore the pub’s traditional decor and open fires.

Andy, originally from Newcastle-under-Lyme, is also planning regular acoustic and band nights and is appealing for local musicians to put their names forward.

For further information about Titanic Brewery and its award winning beers visit the company’s website at www.titanicbrewery.co.uk Titanic Brewery was founded in Burslem in 1985 and has grown to produce around three million pints of fine ale every year. It is owned by Stafford born brothers Keith and Dave Bott. Keith is a past Chairman of SIBA, the society of independent brewers, and is a Director of Cask Marque, see http://cask-marque.co.uk/.
The brewery name is in recognition of Stoke-on-Trent as the birthplace of Captain Edward Smith, Master of the ill-fated Titanic ocean liner.