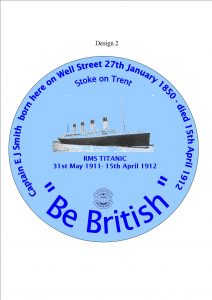 The home of one of Britain’s best known sea captains is to be marked with a plaque once again thanks to Titanic Brewery.

Titanic Brewery has commissioned a new plaque to mark the birth place of Edward Smith, Captain of the ill fated RMS Titanic.

The plaque has been made by Kevin Milward, a local potter, who previously worked as a demonstration potter at the Gladstone Pottery Museum, Longton.

Captain Smith went down with his ship on 15 April, 1912, after it struck an iceberg on its maiden voyage across the Atlantic Ocean.

After organising a mass evacuation, Captain Smith is believed to have told those under his command to “Be British” before going down with his ship.

Edward Smith was born in a terraced house in Well Street, Hanley, Stoke-on-Trent, in January 1850 and rose to become Commodore of the White Star Line and the most celebrated sea captain of his era.

Keith Bott, Managing Director of Titanic Brewery, said: “2012 is the 100th anniversary of the sinking of the Titanic and we wanted to commemorate the disaster and the links with our brewery’s home city of Stoke-on-Trent.

“A plaque marked the street in which Edward Smith was born for many years but has sadly gone missing.

“We felt it was appropriate for the brewery to sponsor a new plaque which will be placed on 51 Well Street as part of events on 15 April this year to mark the 100th anniversary of the sinking of the Titanic.

“The Titanic disaster is part of British and American folklore. But what is less well known, even in his home city, is the remarkable life story of Captain Edward Smith.

“Raised in a terraced house in Well Street, Hanley, Edward Smith rose to become Commodore of the mighty White Star Line. He was something of a celebrity, aristocrats and the rich all wanted a seat at Captain Smith’s table and his views were sought by the media on both sides of the Atlantic.”

Titanic Brewery is named as an affectionate tribute to the fact that Captain Edward Smith, Master of the Titanic, was born in Stoke-on-Trent and all the brewery’s beers have names with links to the sea or the Titanic.

Titanic’s full range of beer can be seen on the company’s website at www.titanicbrewery.co.uk

Titanic Brewery was founded in Burslem in 1985 and has grown to produce more than two million pints of fine ale every year. It is owned by Stafford born brothers Keith and Dave Bott. Keith is Chairman of SIBA, the society of independent brewers.

The Brewery is named as an affectionate tribute to the fact that Captain Edward Smith, Master of the Titanic, was born in Stoke-on-Trent and all the beers it produces have names with links to the sea or RMS Titanic.