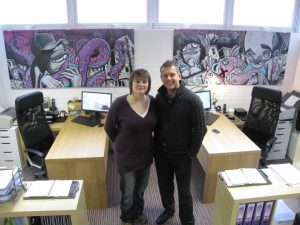 Natalie Hewitt and Mark Carr have joined forces to launch Hewitt and Carr Architects based in High Street, Cheadle, Staffordshire.

The work colleagues found themselves without a job when the well known company shut its doors in Festival Park, Stoke-on-Trent, in July and began trading as a new company based in Manchester.

More than 25 people lost their jobs as the firm, which had traded in North Staffordshire for 85 years, was placed into administration.

The move came as a bitter blow to Mark Carr, the son of prominent local businessman David Carr.

“I had worked at Hulme Upright for 22 years and my Dad had retired from the business, handing down the reigns in 2008,” explained Mark.

“We were given very little forewarning of the closure and it came as a bitter blow. But I knew we had to get straight back on our feet and, having spoken to Natalie, we decided to join forces to set up Hewitt and Carr.”

David Carr now acts as a consultant for Hewitt and Carr along with another well known name from Hulme Upright’s past John Sambrook whose achievements include designing the well known New Victoria Theatre, Newcastle-under-Lyme.

Natalie added: “We have worked hard establishing the business and renovating the first floor of Choices, run by Mark’s sister, in Cheadle High Street as our design studio.

“We now have a growing portfolio of work including a large number of residential extensions and one off houses.  Our commercial client base is also growing and the appointment to design a new children’s day nursery was a welcome addition.”

“As a newly qualified architect, I had only been in a full time role at Hulme Upright for six years,” said Natalie, who grew up in Leek.  “But it has always been my ambition to have a partnership in an architects’ practice, so a lot of good has come out of the turmoil of the past few months.”