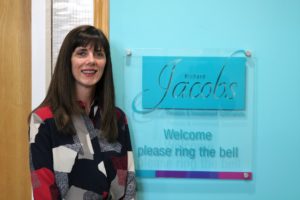 Employers both large and small should beware of being caught out by auto enrolment rules, Richard Jacobs Pensions has warned.
The first round of auto enrolment is now complete but companies cannot simply forget about the scheme, said Sarah Gorton, Corporate Schemes Coordinator at the Newcastle-under-Lyme-based pensions experts.
“Auto enrolment has been a major success, with very high levels of compliance from companies and this has given many thousands of people the incentive to save for their retirement,” said Sarah. “However, companies need to be aware of the increase in contributions required by law. Auto enrolment minimum pension contributions increased from two per cent to five per cent in April, with the worker now paying a minimum of three per cent and a second increase, in April 2019, means that minimum contributions will rise to eight per cent, with the worker paying five per cent.”
Sarah said that there had been a positive response to the scheme with low levels of opt outs by workers. This will continue to be monitored to assess whether rises in the employees’ contribution puts some people off saving.
“Even where employees have opted out, they can request that they enter the scheme once in every 12 month period. We would advise all workers to consider this as it is the only way to get your pension supplemented by your employer and is, therefore, a very good way to save for retirement,” said Sarah
Richard Jacobs Pensions administer schemes for many companies in Staffordshire and Cheshire, including well-known names such as Wrights Pies and the New Vic Theatre.
They are also reminding the smallest companies to ensure they are compliant. Sarah explained: “There are many new businesses who missed the first round of auto enrolment and they should be aware that they have to put a scheme in place. This may also catch-out former sole traders, who have been successful and are now taking on their first employees.
“All companies must either start a scheme or declare that they do not employ anyone. People such as householders with a regular gardener or nanny can easily be caught out but must comply.
To find out more about Richard Jacobs Pensions please go online to www.jacobs-pensions.co.uk.
ENDS
For media enquiries contact Nigel Howle on 0776 2043436, email nigel.howle@howlecom.co.uk