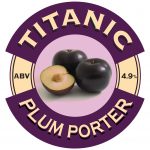 Beer lovers in the East Midlands have raised a cheer to Titanic Brewery’s Plum Porter.

It is the fourth first prize for Plum Porter since it was launched by Stoke-on-Trent based Titanic Brewery in 2011.

The brewery puts the success down to the tastes of a growing army of “Plummers” who are devoted to the fruity ale.

Brewery Managing Director Keith Bott said: “We are absolutely delighted, winning awards is always an honour but to get the public vote from the discerning Castle Rock customers is extra special.

“Thanks to all the people who voted for Plum Porter – the Titanic Plummers as we now know them!”

With an ABV of 4.9 per cent, Plum Porter is a strong, dark ale in which you can readily taste the fruit.

It has previously won awards at CAMRA beer festivals in the East and West Midlands and Cheshire.

Plum Porter is available all year round in pubs serving Titanic Brewery beers and in bottles.