Veterans are being invited to join pupils at a Remembrance service at Newcastle-under-Lyme School. 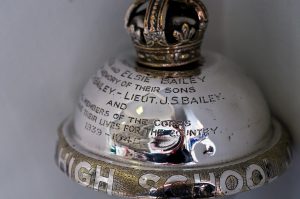 Details on the ceremonial mace donated by the Bailey family

The school holds an annual Remembrance Service and Parade on 11 November and is extending  a welcome to current and former armed forces members from the North Staffordshire area.

Among those in attendance this year will be ex-pupils and brothers, Martin and Michael Bailey from Newcastle-under-Lyme.

The Bailey family have strong links with the school and donated a ceremonial mace for use on ceremonial occasions following the death of family members, Charles and Stuart Bailey in World War Two.

Martin said:  “I am very pleased to be able to attend this year’s Remembrance Parade at Newcastle-under-Lyme School with my brother, Michael.

“It means such a lot to our family.  We are especially delighted to see the mace being used that was donated in remembrance of our two cousins Charles and Stuart Bailey who were lost in World War Two and who were, like us, pupils at the school.”

Headmaster Nick Rugg said: “We are extending a warm welcome to Staffordshire war veterans as we honour members of the Armed Forces who died in conflict while serving our country.

“Remembrance Day is an important tradition at Newcastle-under-Lyme School and the parade features the school Mace generously donated by the Bailey family.

“I am particularly looking forward to welcoming Martin and Michael Bailey back to their old school.”

Invited guests will join pupils and staff for the Remembrance Service at 11am on 11 November.

Note to editors: Newcastle-under-Lyme School is an independent day school catering for pupils from three to 18 years of age. A nursery, junior school, senior school and sixth form are all part of the school family. The School is able to commit over half a million pounds a year from its own resources to support the education of children from lower income backgrounds.