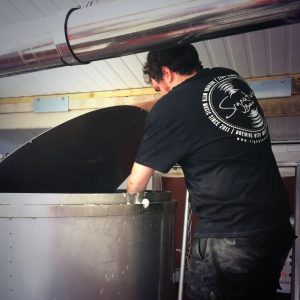 Young brewers Tom Bott and Sam McGregor have won investment from a host of musicians as they aim to stamp their signatures on the beer and music scenes.
Musicians such as Ed Harcourt and Frank Turner have backed a crowd funding campaign by Signature Brew.

Tom and Sam, from Stafford, combined their love of quality beer and live music to launch Signature Brew and have worked with artists as diverse as Professor Green, the Hold Steady and Enter Shikari.

Now the cousins have launched a campaign on the Crowdcube crowd sourcing website to raise £125,000 for 13 per cent equity in London based Signature Brew.
Head Brewer Tom has brewing in his blood as he is the son of Titanic Brewery Director Dave Bott and has worked as an apprentice at the Stoke-on-Trent brewery.

Tom’s uncle, Keith Bott, co-owns Titanic along with Dave and is a familiar figure in brewing circles for his work with Titanic and previous roles as President and Chairman of industry body, SIBA.

“Signature Brew was inspired by our fondness for good beer and live music and the contrast between the beers we loved and the often insipid drinks on offer at music venues,” explained Tom Bott.

“We spoke to a few bands we knew and, in a leap of faith, spent all the money we had on malt and hops.

“Three years later we have brewed beer with music industry stars such as Professor Green and Enter Shikari and have recently moved to new larger premises in Leyton, East London.”

Now investors have the chance to own part of Signature Brew as Sam and Tom look to expand operations.
For a minimum stake of £10, people can join investors from the music industry include Enter Shikari, Frank Turner, Baby Godzilla, Chicane, HooDoo Pop, Ed Harcourt, Scroobius Pip, Jake Morley, Great Cynics, JB Conspiracy, and Chas Palmer-Williams.
As well as owning shares in the brewery investor perks include beer discounts, launch parties with the artists and even the opportunity to brew their own custom beer. All investment information can be found on the company’s Crowdcube page, www.crowdcube.com/signaturebrew.
The crowdfunding venture follows a major investment by Signature Brew in new premises in East London, having previously worked from small premises in Hackney while often using other breweries facilities for larger brews.
Signature Brew has purchased a 10bbl* brewhouse which will be installed in the new Leyton premises in March.
Sam said, “Working closely with artists has always been at the heart of everything that Signature Brew does. We’re excited to be able to count some of our favourite musicians amongst our shareholders – as well as opening up this opportunity to music and beer fans alike.”
ENDS
For media enquiries please contact Tom Bott at Signature Brew tom@signaturebrew.co.uk

*Note: One bbl is equivalent to 35 imperial gallons.