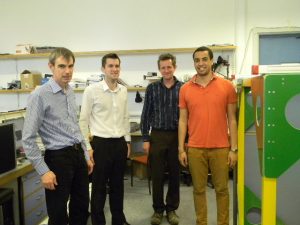 Professor Tony Peyton (left) with members of his research team

Pioneering research which could save millions of lives is being led by a team from Manchester University.

Backed by funding from landmine research charity, Find A Better Way, a team of academics and engineers is developing technology which will greatly speed up the detection of landmines.

“We are leading the way internationally in the work to find a solution which will allow non-military clearance teams to detect the millions of landmines buried beneath the ground in current and former war zones,” said Professor Anthony Peyton of the University of Manchester School of Electrical and Electronic Engineering.

“The Find A Better Way Research has the potential to speed up detection of landmines by a factor of 10.”

Speeding up detection is extremely important as, at the current rate, it would take more than 1,100 years to rid the world of landmines.

The research work is the brainchild of a partnership forged in Manchester by one of the city’s favourite adopted sons, Sir Bobby Charlton.

The Manchester United and England footballing legend set up Find A Better Way after seeing the misery caused by landmines during fact finding visits to Bosnia and Cambodia.

Professor Peyton’s team had previously forged links with John Edees, Chairman of Knutsford based Find A Better Way. John has major experience of transferring technological research from the academic sector into industry.

Crucially, Sir Bobby secured the backing of Steve McGill, Group President of AON Global Plc and this has helped to secure major funding from the global risk industry worldwide. AON is also the principal sponsor of Manchester United

Funding from the risk industry has allowed Find A Better Way to sponsor crucial research by Professor Peyton’s team at Manchester and by other academic groups across the UK.

Sir Bobby said: “Find A Better Way’s key goal is to develop new technology to accelerate the detection and removal of landmines globally.

“Following visits to Bosnia and Cambodia, I knew I had to do something to help and knew that I was in a fortunate position as my career in football has given me the power to open many doors.

“Research showed that many people who could help were either based in Manchester or linked to the city and I never doubted that Mancunians would rally round.”

The Find A Better Way research team at Manchester University are part way through year one of an ongoing project.

The research team are carrying-out laboratory tests into processes which should allow landmine detection teams to more easily distinguish between landmines and other metal debris buried in war ravaged areas.

Professor Peyton said: “Currently metal detectors are still widely used to search for landmines. The aim of our research is to give the mine detection teams the technology to allow them to differentiate between landmines and other metal debris buried underground.

“There has been research and development of military detection systems but these are often not available to humanitarian clearance teams and have not been designed for the specific needs of humanitarian operations.”

A separate Find A Better Way research programme with an engineering team at Furness College, Cumbria, is looking at the development of an acoustic probe which will be used to further interrogate the ground and sub-soil following the location of unexploded objects by metal detectors.

Find A Better Way is offering research funding of up to a staggering £1 million to UK universities and other academic bodies, proposing innovative technology led projects which will further enhance detection and removal of landmines.

Find A Better Way is working with research scientists to develop technology to accelerate the detection and safe removal of the estimated 110 million landmines in place around the world.

Find A Better Way is based at Booths Hall, Knutsford, Cheshire.

For more information on Find A Better Way, please visit their website at www.findabetterway.org.uk