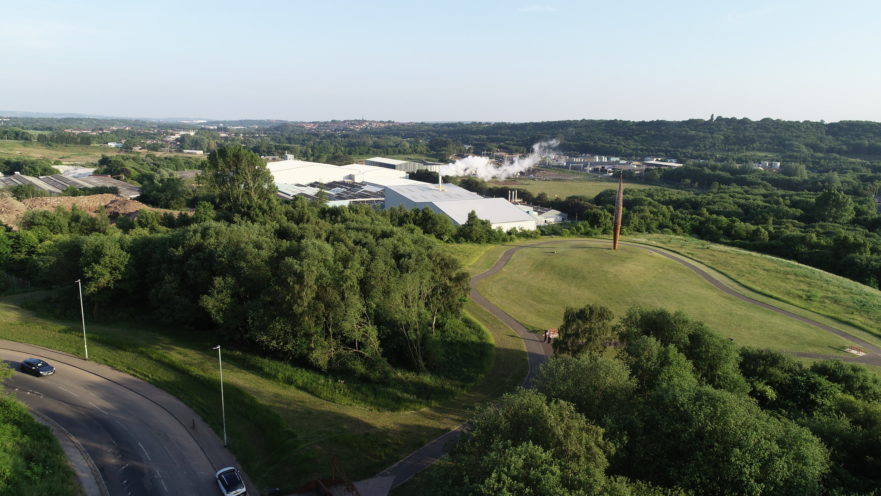 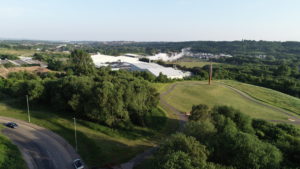 Goldendale 2018 from the Sky Cam

Civil Aviation Authority approved drone pilot Nigel Woodcock has used his expertise to help internationally acclaimed landscape artist Ian Mood to stage a unique exhibition of Stoke-on-Trent landscapes and complete a poignant tribute to the artist’s grandad.
Completing the project has given Nigel a fascinating insight into the changing post-industrial landscapes of his native North Staffordshire.
Nigel, from Silverdale has been a professional drone pilot for a year and runs a business completing drone photography for companies such as land agencies, surveyors and quarry operators.
But a meeting with Clayton born Ian led to his most unusual job to date.
“Ian learned to paint by practising with Sid Meir, his grandfather, who was himself a successful artist and to this day, still uses Sid’s brushes,” said Nigel. “In 2016, Ian’s mum discovered a box of slides from the 1970s. Sid had photographed industrial scenes around the Potteries with a view to painting them but had passed away before he had the chance to work on the paintings. 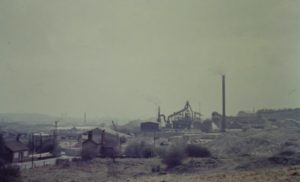 “When I met Ian, he had decided to use the slides to complete his grandad’s work and he asked me to fly my drone over the sites to provide aerial photography.”
Comparing and contrasting his drone shots with Sid’s photos led to a revelation for Nigel. He explained: “I had never realised just how much work has been done to reclaim and beautify former industrial sites in the Potteries. Sid’s photos of areas such as Goldendale and Shelton Bar depict a smoke laden scene of an industry scarred landscape. Now, viewing the city from my drone camera, reveals a green city, far from the unfair image many have of Stoke-on-Trent.
“Goldendale is now an urban oasis of greenery and the legacy of the National Garden Festival means that Festival Park, the former home of Shelton steel works, is criss-crossed with tree-lined walkways.”
The changes are bitter sweet for Nigel who began his working life at Silverdale Colliery and is well aware of the demise of heavy industry. But Nigel had left the pit before the British Coal closure programme and has had a varied career, including a recent stint selling tea.
He took his Civil Aviation Authority qualifications in 2017 and invested in a franchise opportunity with The Sky Cam, a drone imagery company with over 50 approved pilots across the country.
“We often hear about drones being used irresponsibly by unqualified amateurs, but there’s a lot of legitimate and useful uses for drones from commercial land surveys to aerial photography of property, such as country hotels and homes,” said Nigel.
Nigel’s photos have been essential to Ian’s work honouring the artistry of Sid Meir.
Ian said: “My exhibition will contrast Sid’s photography with my depictions of what is there now. Nigel’s Sky Cam shots helped show me details of the sites as they are today by getting a perspective above the tree line.”
The exhibition, called Common Ground, will go on show at the Burslem School of Art in July.
Ian now sells his work to collectors across the globe and has built a following in the US where he won the prestigious Frank Swift Chase Plein Air Award in 2014.
He regularly exhibits alongside artists such as L.S. Lowry and Arthur Berry, and is represented by leading North West galleries such as Gateway Gallery (Hale), Trent Art (Newcastle-under-Lyme), Barewall Gallery (Stoke,) Paper Cuts (London) and Robert Foster Fine Art (USA).
ENDS
For media enquiries contact Nigel Howle – 07762043436, email nigel.howle@howlecom.co.uk.