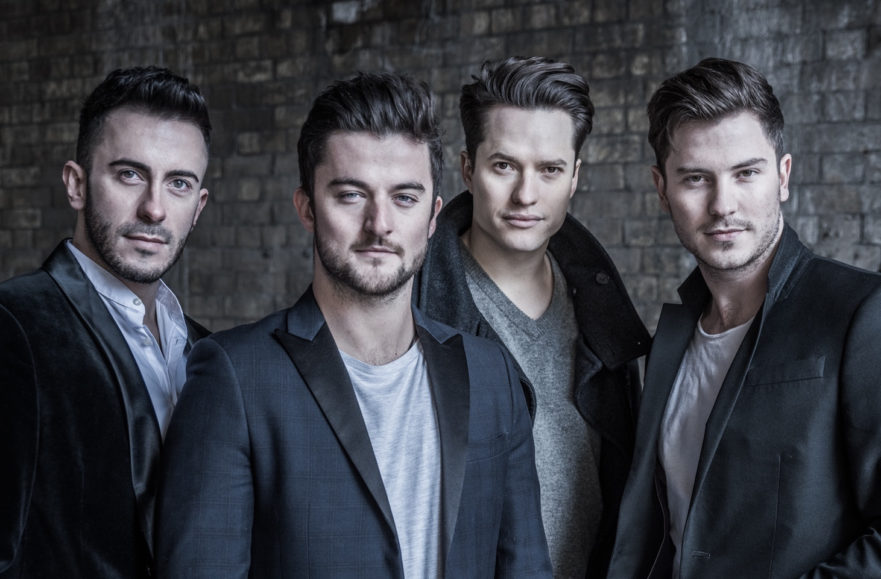 A leading UK Take That tribute band are to head an exciting mix of acts at Fireflies; the Midlands new family friendly music festival to be held at Weston Park in May.

Up and coming popular singers and groups from across the Midlands will take the stage on Bank Holiday Monday, 27th May, before the evening culminates with a celebration of Take That’s hits from A Night of Take That, one of the UK’s leading tribute bands.

Fireflies Festival goers will be treated with hits from Take That’s long career, from Could It Be Magic to Shine, together with Robbie Williams classics, Let Me Entertain you and Angels. Members of the band are West End show performers and the Take That show is highly acclaimed. A recent review from the organisers of a Oxfordshire charity event said: “Gobsmackingly good, they exceeded all expectations and their encouragement of audience participation was very well received and taken up! They were excellent and certainly the best “Take That” tribute band seen by anyone in this audience.”

Fireflies is the latest offering from successful West Midlands events organisers’ Fizz Festivals. It  is a relaxed, laid back music festival with a multi-generational vibe, offering amazingly talented local performers, as well as tribute bands to get everyone on their feet, there truly is something for every musical taste.

Alex Jayne, a well-known face on the local music circuit will be prominent among the supporting acts. Originally from Wheaton Aston, but now popular on the London music circuit, Alex Jayne is a classically trained singer songwriter with a vibe somewhere between Fleetwood Mac and the English Indie music, Alex was chosen by James Blunt to support him at Birmingham’s National Indoor Arena and has her songs played on BBC Radio 2 and playlisted across 650 Caffé Nero stores.

Also taking to the stage will be Callum Mountford, another up and coming singer from Stone, Staffordshire. Callum won Signal Radio’s Star Search competition and mixes musical styles from country to pop.

ALLORA, an all-female group from Leeds will bring both harmonies and rock to the Weston Park stage. Power guitars plus 3-part vocals have proved popular with audiences across Yorkshire and beyond.

Two further local acts complete the bill. Market Drayton guitarist and singer Cameron Forrest performs his own compositions and covers from bands such as Bastille and Blossoms, while The Endings, who hail from Telford, are a high energy five-piece folk rock band with an Irish twist.

Fireflies organiser Esther Wright said: “We are excited to announce such a talented line-up for our first Fireflies Festival. We have set out to create a family friendly festival where music lovers can bring the whole family, picnic tables and chairs, and even your (the) family dog, and dance to the music as the light fades over the magnificent setting of Weston Hall.

“A Night of Take That will bring all the hits and they are supported by a showcase of talented bands and singer-songwriters including some of the best up and coming artists from Staffordshire and Shropshire.”

Expanding on the friendly ethos behind the Fireflies Festival, Esther added: “Ask anyone about their music tastes and they will always tell you ‘I like a bit of everything’ and that’s certainly our aim at Fizz Festivals.

“We are also looking to reboot some of the more unappealing ideas of a festival. We know that many people love the idea of a festiva,  but can be put off by the idea of huge crowds, stinky toilets and parking miles away from the event. Our events offer an alternative, relaxed family feel, a multi-generational audience, manageable crowds, clean toilets and ample free parking close to the event.”

Fireflies will follow a Proms and Prosecco in the Park event at Weston Park on the previous day, Sunday 26th May. Esther said: “The two events have a different vibe but there’s a huge audience out there for high quality live music of any genre and we are offering the opportunity for people to come to both, or just one, with a range of ticketing options.

Fizz Festivals have announced a tiered booking system with discounted deals for people who book early and a chance to book for one or both events. Camping passes and gazebo hire are also available. See www.fizzfestivals.com/our-events/promsandproseccointhepark2019westonpark.

Proms and Prosecco in the Park is being headlined by popular opera duet Belle Voci who were finalists in 2018 popular TV show The Voice.

Weston Park is situated on the A5 at Weston-under-Lizard, just 30 minutes from central Birmingham, three miles off the M54 Jct 3 and eight miles off the M6 Jct 12. New M6 Toll Road, Jct 11A.