A Staffordshire businessman who has helped dozens of companies to expand has become the new Managing Director of Business for Breakfast in the UK.

Stuart Walton left the world of corporate finance in 2009 to take on a Business for Breakfast franchise in Staffordshire.

Since then, the former President of the Stafford Chamber of Commerce, has established a network of over 150 members in Staffordshire and has expanded his operations into neighbouring areas such as Congleton, Nantwich and Knutsford.

Business for Breakfast was launched by entrepreneur John Fisher 12 years ago.

From 1 November, Stuart, of Stafford, will take on the UK Managing Directorship while Salford based John will be responsible for recruitment of new franchisees in the UK and the expansion of BforB overseas.

Stuart, who has formerly led finance teams for major international companies, said: “I took on a BforB franchise in 2010 because I was looking for a new challenge and bought into the concept of using referral marketing, or networking, to grow small and medium sized businesses in Staffordshire.

“It has proved a great success and Staffordshire has a thriving BforB membership with companies referring over £500,000 of business in 2011 – a figure that is set to double in 2012.

“”I have developed a close working relationship with John Fisher and we will now work together to expand the BforB brand in the UK and overseas.”

John Fisher will concentrate on recruitment of new regional directors across the UK and on expanding the growing overseas market. BforB has recently established groups in the Czech Republic, Australia and Slovakia.

Stuart added: “We are looking to expand and want to work with new franchisees across the UK. This kind of franchise often suits people like me who have worked in the corporate arena but are looking for a new challenge.  Buying into a franchise can offer a relatively safe route into self employment while I have witnessed first hand the satisfaction of seeing companies thrive and expand under the BforB system.”

Stuart will base the BforB UK business in offices on the Staffordshire Technology Park, Beaconside, Stafford.

John Fisher said:  “I have established a strong working relationship with Stuart and worked with him as he has grown a very strong BforB network in Staffordshire.

“I am delighted that we will be working together to establish a national and overseas network for BforB.” 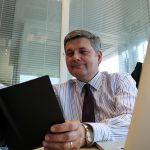 In 2006 John developed the franchise model that can be seen today. The company has grown rapidly and now has over 20 franchisees.  With its head office in Manchester the company provides strategic, marketing and administrative support to its franchise base and breakfast club members via a bespoke IT system. To find out more log on to: http://www.bforb.com/