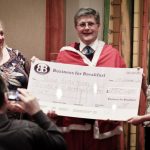 Fundraising was on the menu for Christmas Dinner when businessman Stuart Walton weighed in following a sponsored slim to raise funds for enterprise projects in schools.

Stuart, of Stafford, is Chair of the Young Enterprise Area Board for Stafford and Stone and collections are held at BforB meetings to give the organisation free membership so that it can liaise with local businesses across the county.

With a combined starting weight of 42 stone, Stuart and Jeremy had a lot to lose and when the results were announced at a BforB Christmas get together, Stuart had lost a stone and a half while Jeremy shed around a stone and three quarters.

Stuart donned a Santa suit to announce the results during the BforB Christmas Dinner at the Moat House, Stoke-on-Trent, before handing a cheque for £250 to YE Staffordshire representatives Sarah Bowen and Janis Wilcox.

A further £100 was raised at a collection during the event.

Stuart said: “It was hard going at times but we lost well over three stone between us thanks to expert tutoring from Carol Sinfield, a BforB member from the Nantwich Wellness centre.

“Business for Breakfast in Staffordshire has supported YE since our inception and several members go in to schools to mentor the entrepreneurs of the future.”

“Collections are regularly held at our meetings in Stoke-on-Trent, Stafford, Penkridge, Leek, Uttoxeter and Stone.

“I’d like to thank Jeremy of Greenlands Insurance for joining me on the challenge.” Jeremy manages an area covering Staffordshire, Cheshire, Shropshire and North Wales.

In 2006 John developed the franchise model that can be seen today. The company has grown rapidly and now has over 20 franchisees.

Stuart Walton launched BforB in Staffordshire in 2010 with around 20 members, There are now seven breakfast groups in the county along with two ladies lunch groups.

Stuart took over the reins as UK MD of Business for Breakfast in November 2012 with John Fisher moving to work on overseas development and UK regional director recruitment.

Stuart is based at the Staffordshire Technology Park, Beaconside, Stafford.