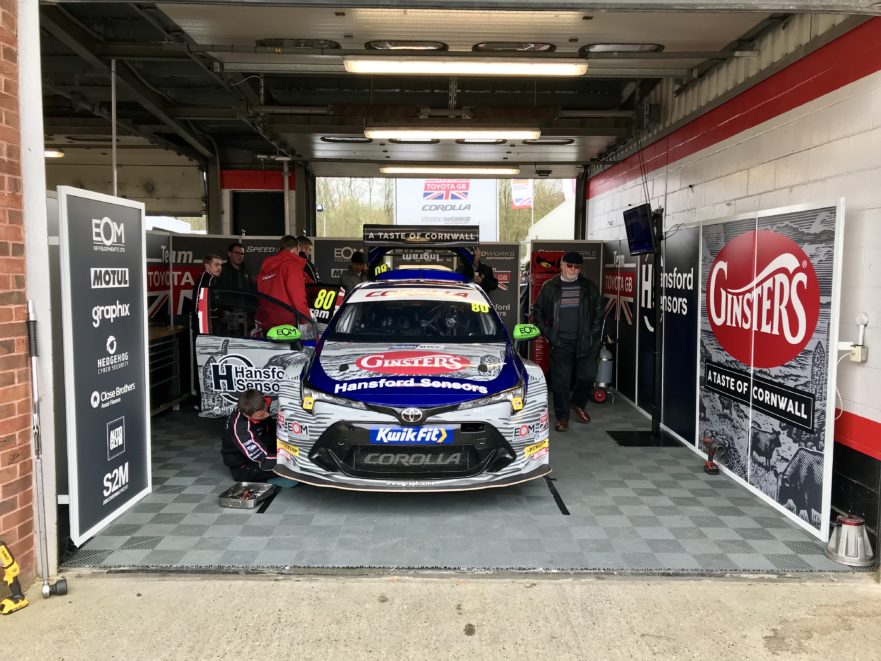 Sponsorship with Team Toyota GB in their much-prized return to the British Touring Car Championship (BTCC) is revving up the profile of Staffordshire firm Graphix on the national stage.

At the same time, the deal is adding to the work load at the print, design and signage specialists, with marketing collateral, newly branded bumpers, bonnets and car panels needed for every race.

With three races at each track event, the Norton company has to pull out all the stops to keep the pit crews supplied.

“There’s 10 rounds of the BTCC and FP1, FP2, Qualifying &three races in each round. This means we have to ensure three fully branded body kits are available for every event,” explained Graphix MD Steve Ward.

“As a company, we have been associated with motor sport branding for many years and the return of Team Toyota GB has really upped our profile in 2019.

“I am a petrol head, so really enjoy it and the whole team at Graphix gets a thrill from watching the racing from the paddock and also live on TV.”

Team Toyota GB has returned to the Kwik Fit sponsored British Touring Car Championship (BTCC) in 2019 with the all new Toyota Corolla and main sponsors, Ginsters and Hansford Sensors. The car manufacturer is competing in partnership with Northwich based Speedworks Motorsport and two-time BTCC independent champion Tom Ingram.

Graphix have worked with Speedworks for several years and completed the branding for the stunning new Corolla. After debuting the Corolla at Brands Hatch in early April, Tom took top spot on the podium at Donington Park in late April, with Graphix branding proudly displayed among the logos on the car.

Steve said: “Speedworks have become great friends of Graphix and their partnership with Team Toyota GB is recognition of years of hard work and development.

“Alongside the thrill of the race, there’s an awful lot of work for our team, as we have completed the Team Toyota GB branding, hospitality branding, signage for the pit lane and for the Team Toyota GB  race trucks & garages at each track. The BTCC has three races at each event and they get through a lot of kit as the touring car series is well known for its close quarters racing.

“We have to prepare three sets of everything on the car for each race week as they get through an awful lot of bumpers, spoilers and bonnets.

” We have worked together with Steve, Simon and the Graphix team for a number of years. Their passion and commitment to deliver the very best under tight deadlines is something that we understand only too well here at Speedworks. There are very few companies that can perform under pressure but Graphix always pull it off in a professional and friendly manner. Graphix is a family owned and run business, like ourselves, and I believe that this is a quality that sets us both apart in our respective industries, nothing is ever too much trouble. I’m pleased to call these guys the best in the business and our friends.”

Brothers Steve and Simon Ward founded Graphix 26 years ago. The company has grown to a full-service agency with a team of 12 including graphic designers, printers and signage specialists. A major investment programme over the past three years has seen Graphix spend around £300,000 on state-of-the-art small and large format printing and developing in-house capabilities to work on any size of print, design and signage project.

The company works with many companies, including well-known names such as bet365 and Novus and has also grown a reputation in the world of sport.

Along with motor sport links, Graphix work with football clubs including Huddersfield Town and Stoke City, where they are the club’s official print and signage partner.