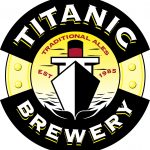 Titanic Brewery’s Burslem roots have led to an unusual order from the town’s most famous son.

When Robbie Williams’ representatives were looking for beer to serve at the launch of the FARRELL Autumn/Winter collection they decided to call Titanic Brewery. Guests at the launch of the labels first ever store enjoyed bottles of Titanic Iceberg, shipped from the Potteries especially for the event.

“As a brewery from Robbie’s home town we were asked to be the Beer Sponsor for the event,” explained Titanic Managing Director, Keith Bott.

“Like Titanic, Robbie is associated strongly with his Burslem roots and Farrell is named in honour of Robbie’s grandfather who is also from the town. Apparently Mr Farrell was a larger than life character and a stylish dresser who went by the nickname of Jack the Giant Killer.”

Keith added: “We are always delighted to look at new markets and links such as this are valuable as they show that quality, British beer is popular with a young and fashionable crowd. It is great that Robbie and his team offered us this opportunity.”

The Farrell pop-up shop on Earlham Street will be open for six months.