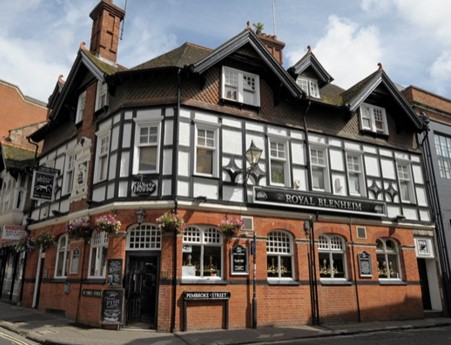 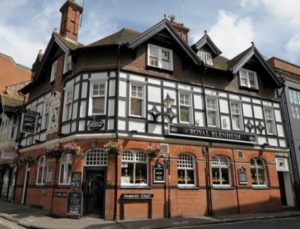 An imposing 19th Century city centre pub has re-opened following an extensive refit by a joint partnership of three breweries including Oxford’s own White Horse Brewery.
The Royal Blenheim, St Ebbes Street, Oxford, popular with real and craft ale drinkers, had been closed for just under a month to allow refurbishment work to go ahead.
“The Royal Blenheim is an attractive city centre pub and simply needed to be up-dated,” said Steve Hay, the new Manager of the Royal Blenheim. “It attracts a loyal clientele and we wanted to retain the traditional ambiance in the pub while making minor alterations to reconfigure the bar area and upgrade the fittings and furniture. The pub has a reputation for the quality of its beer and features in the CAMRA Good Beer Guide. With the refurbishment taking place, we felt it was also a great time to give our food offering a bit of a shake up too. We have re-launched with a new menu which will include; pub classics, light bites and ‘dirty fries’. The menu also includes dishes for vegetarian, vegan and gluten free diets.”
The refurbishment has been completed in a unique partnership between three breweries, White Horse, of Stanford in the Vale, Oxfordshire, Titanic Brewery, Stoke-on-Trent, and Everards, of Leicester.
The trio combined to re-open the Royal Blenheim in an agreement which allows a great range of beers in a wonderful central location within Oxford.
The partnership is a new version of Project William, an initiative which began in the late 1990s as Everards and Titanic worked together to reopen pubs and grow the Titanic brand in its north and mid Staffordshire heartland.
At the Royal Blenheim, Everards are the main funders, Titanic manage the pub as part of its growing portfolio, and the White Horse Brewery benefits from a locally branded pub selling its produce.
Titanic Brewery’s owners, brothers David and Keith Bott, are also shareholders in the White Horse Brewery.
David Bott said: “Buying pubs in this way makes perfect sense for smaller breweries. As a larger brewery, Everards have the buying-power and, at Titanic, we have the knowledge of opening and running successful community pubs. White Horse has a reputation locally for good beer and they now have a strong presence in Oxford city centre through the Royal Blenheim, while Titanic and Everards gain a presence for beers such as Iceberg, Plum Porter, Tiger and Sunchaser.
“The Royal Blenheim pub is a stunning looking city centre building, steeped in history, and the current refurb is providing customers old and new with an interior to match.”
Named in honour of historic local landmark, the Uffington White Horse, White Horse Brewery was established in 2004 and has grown a reputation for fine ales including Black Beauty, Village Idiot and Wayland Smithy. Its beer can be found, on a regular basis, in many pubs across Oxfordshire.
In contrast, Everards has been trading since the 19th Century and owns scores of pubs in its East Midlands catchment area and beyond.
Titanic Brewery was founded in 1985 and is owned by brothers David & Keith Bott. It started life as a micro-brewery but has grown to produce over three million pints of beer a year and employs around 150 people.
ENDS
For media enquiries contact Nigel Howle – 07762043436, email nigel.howle@howlecom.co.uk