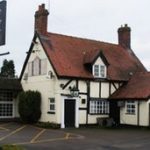 An historic country pub which was saved from closure by local residents will be reopened in partnership with Titanic Brewery on Thursday, 29 November.

Villagers in Seighford, Staffordshire, rallied around to buy the Hollybush amid fears it would be sold and be lost to a housing development.

The Seighford Pub Company, made up of around 70 villagers who pledged money to buy the Hollybush, recently signed a deal for Titanic Brewery from nearby Stoke-on-Trent to run the pub.

The Grade Two listed building, dating back to 1675, had operated as an Indian restaurant prior to closure.

Dave Bott, brewery director and local resident, said: “The Hollybush was much loved by the residents who were shocked by plans to sell it off to a developer.

“We were impressed by the way the local community rallied around and are delighted to be able to get involved in its rebirth as a traditional village pub.

“One thing this pub can guarantee is regulars – local people have invested in their village pub and are determined to make it a success.”

Since buying the pub, the shareholders have put a lot of effort into making the building waterproof and have held workdays to maintain the premises.

Titanic Brewery then brought in professional builders to prepare the Hollybush for next week’s relaunch.

Mr Bott, who lives in a neighbouring village, is a shareholder, having invested in the project months before the idea that his brewery might take it on, was thought of.

Taking on the Hollybush is a departure for Titanic Brewery which has concentrated on investing in and reopening town based pubs across north and mid Staffordshire.

The Hollybush is better known as a country dining style pub and food will be a major feature following the reopening.

Members of the media are invited to join shareholders and Titanic Brewery staff at the Hollybush, Main Road, Seighford, ST189PQ, at 3pm on Wednesday, 28 November.