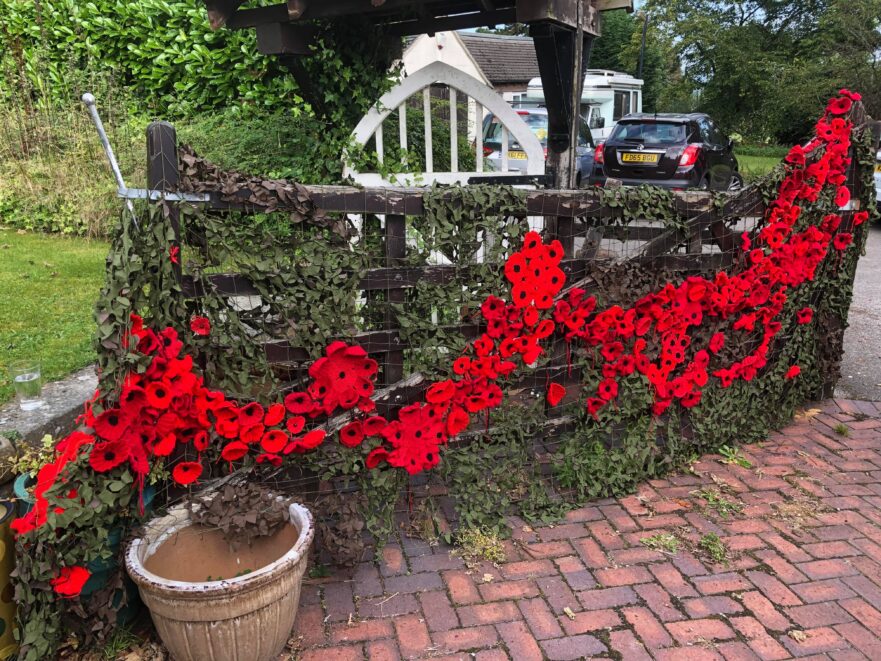 A spectacular array of poppies will be unveiled at St Margaret’s Church, Wolstanton, on Sunday.

Around 2,000 poppies have been crocheted, knitted or felted by women from the Let’s Make Jam WI group from Newcastle-under-Lyme. 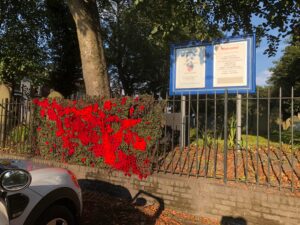 They will be on display throughout November, as a reminder of all who have lost their lives in war.

The sea of red poppies fencing have gone on show after the Let’s Make Jam group contacted Patrick Griffin, Curate at St. Margaret’s, Church Lane, Wolstanton. They adorn the external walls and fencing close to the Cenotaph at the church.

Let’s Make Jam are a vibrant, informal WI group who meet on the second Friday of each month.

Members of their subsidiary craft group ‘Jammie Hookers’ regularly support local causes, and were looking for a big and meaningful project that they could all get involved in. After careful consideration of many suggested projects, it was agreed to create a large Poppy display for a local church.

Mags Johnston, who suggested the Poppy Installation, said: “I remember as a child, going to Sunday School and then attending the service at the Cenotaph outside Hanley Town Hall. To be involved with the Poppy Display designed and made by members of Let’s Make Jam WI, has been an honour and privilege, the camaraderie, fun, humour, hospitality and well just being the best. It works like a well-oiled machine… …Working together we have achieved the most amazing display, incorporating thousands of poppies, all made by members, in all shapes, sizes, colours and mediums. It will be one display not to be missed.”

Mirroring the camaraderie displayed in the early days of the Suffragette movement, the ladies assembled, recruiting others from outside of the Jammy Hookers group, each with their own powerful reasons for wanting to support such a cause. The crochet, knitting and craft group who meets on the first Thursday of every month, outside of their usual meetings, started work at the start of September 2021, successfully making around 2,000 poppies in  little over 1 month and assembling them on display nets. 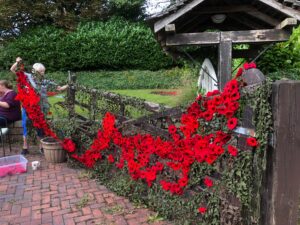 Pauline Forrester said: “This year I’ve crocheted 237 poppies which have been split between Let’s Make Jam’s poppy display and Meir Matters. I have made them in memory of my husband who was in the 237 squadron of the Royal Logistics Corps. Until he died in 2020, he was the Poppy Appeal Organiser for MHF01 North Staffordshire and the Secretary of the Meir Longton Royal British Legion Branch”

Rosie Howe said: “Remembrance Sunday has always been important to our family. We always observe the two minutes silence. My dad who was a submariner and a commander in the Sea Cadet Corps for many years, always went out on parade. It’s been a pleasure for me to make a small contribution to this wonderful display. I have kept a poppy back to take to my dad on that day”.

The team  hope the poppies will have a big impact, stopping people in their tracks and making them think about all those who have given their lives so that we can be free of war. Many felt this was especially fitting with the current circumstances in Afghanistan, and the fact that as a region we are now welcoming large numbers of refugees from these areas. The ladies are hopeful that their display will be a reminder of the importance of peace, acceptance and support within the world we now live in.

The display is being assembled on site tomorrow, Sunday 31st October.

For more information, or enquiries please contact Group Secretary, Carly Twigg by telephone on 07583161684 or by email at twiggysmrs@gmail.com